Given the above-market condition, we would review a industrials stock - Feedback PLC (LON: FDBK). Based on 1- year performance, FDBK is down by about 40.75 percent (as on 29 July 2020 before the market close at 3:00 PM GMT+1). Let’s review the financial and operational performance to understand the stock better.

Feedback PLC is a UK based company that provides software and systems used in medical imaging technology. The medical researchers, clinicians and radiologists use the Company’s products. The products of Feedback include TexRAD, CADRAN and Bleepa®. The Company is headquartered in London, and it is included in the FTSE AIM-All Share index. Total outstanding market capitalization of FDBK stood at around GBP 9.60 million.

Bleepa® is an instant messaging service that provides access to clinical-grade Picture Archiving and Communications System (PACS) images. The clinical grade images such as X-rays, CT and MRI scans can be viewed using the app on smartphones and tablets. Pennine Acute Hospitals NHS Trust and Royal Papworth Hospital NHS Foundation Trust are currently using CE marked Bleepa®. The app was launched at NHS Expo 2019 in September 2019 and recently achieved CE mark that would support in the commercialization of the product. The CE marking is compulsory under the UK and Europe law for products that are used to display digital patient images. The image viewer is used for the discussion meets, and MHRA has guided hospitals and clinicians to use medical devices with CE mark. MHRA with the CE mark would be at the user’s own risk, and the companies could be liable for civil claims for damages in case of any incident.

The Company entered a commercial partnership with Imaging Engineering LLC. Imaging Engineering is a US-based specialist technology provider that helps in the installation and reequipping of modernized fluoroscopy equipment. The Company completed the strategic review of the Cadran portfolio, under which it would offer core software to manage the Insight Essentials. The operation would include image capture through data management to the Digital Imaging and Communications in Medicine (DICOM) network. The product of the Company would focus on the extensive range Imaging Engineering initiative that would update the fluoroscopy equipment across the US, with an initial focus on 200 provider sites. The subsidiary of the Company would receive a license fee for every installation performed by Imaging Engineering. The Company does not have any commitment other than providing and maintaining software under this license. 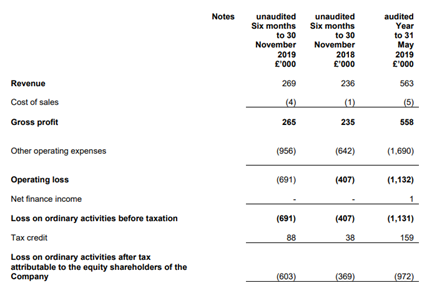 1-Year Chart as on July-29-2020, before the market close (Source: Refinitiv, Thomson Reuters)

The Company would focus on converting the NHS trusts to paying customers of product Bleepa®. The other key attention would be to work with strategic partners for developing growth opportunities. Feedback would also engage in the functionality development of Bleepa® for non-healthcare usage. It would expand the direct and indirect sale channels along with seeking international expansion opportunities. Feedback plans to expand Bleepa®’s footprint across the UK and abroad. The Company would engage in active communication with the Trusts and organizations that are unknowingly using uncertified tools for patient image viewing. The usage of uncertified devices exposes to civil claims. The Company would ensure the roll-out of the regulated communication platform.