The company’s shares are listed on the AIM segment of the London Stock Exchange where they trade with the ticker name CVSG. 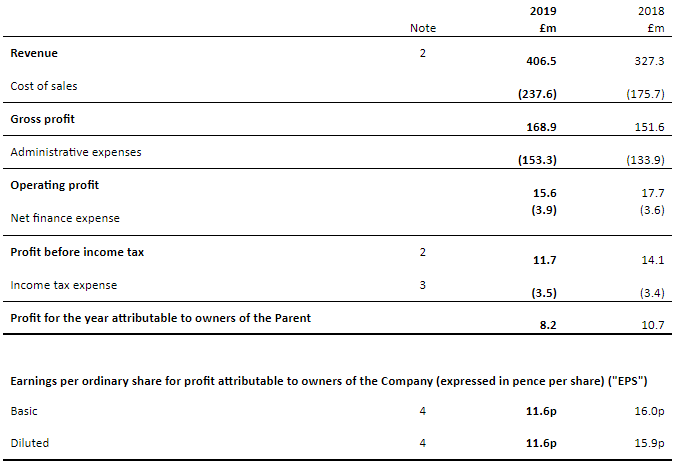 Price Chart as on 27 September 2019, before the market close (Source: Thomson Reuters)

The company operates in a sector with favorable market conditions. The consumer spending behavior trends in this sector have shown that it is resilient to economic downturns and people are getting more and more serious about the wellbeing of their pets. The company has already made contingency plans which  are in place to manage any short-term Brexit-related impacts and the board has assures all shareholders that the business is well grounded and is well placed to withstand any significant adverse impact which the UK's decision to exit the EU may bring with it.

Multiple initiatives are being undertaken by the company to bring in further organic growth and the company continues to generate positive operating cashflows.  The board believes that the company is now well placed for further investment in its people and infrastructure to drive growth while continually keeping its focus on maintaining the highest standards of veterinary clinical care.  The company intends to explore selective acquisitions where the Board feels confident that those will be able to generate appropriate returns for the company.

Overall the board is happy with the improvements that have been brought about in the company during the year and is confident that it is very well poised for future growth and enhancement of shareholder value.

Pennon Group Plc is United Kingdom based environmental infrastructure and management company which was formed at the time of privatization of the water industry in 1989. The Company provides water treatment and waste management services in Cornwall Devon and in parts of Dorset and Somerset. The company has three subsidiaries namely; the South West Water Limited, the Bournemouth Water Limited and the Viridor Limited. The company’s water business vertical comprises the regulated water and wastewater treatment services being provided by South West Water Limited and the regulated water services being provided by Bournemouth Water Limited. The company’s waste management division comprises of waste recycling and recovery services being undertaken by Viridor Limited. The South West Water Limited subsidiary is into providing water and wastewater treatment services for Devon, Cornwall and parts of Dorset and Somerset. The Bournemouth Water Limited subsidiary is into the business of giving its water services in areas of Dorset, in Hampshire and in Wiltshire. Viridor Limited is into recycling of waste, recovery of energy and provision of other waste management services. The company provides its services to over 150 civil amenity authorities and corporate customers, which in turn provide their services to 32,000 customers across the United Kingdom.

The shares of the company are listed on the London Stock Exchange where they trade with the ticker name PNN.

The company on 27 September 2019 came out with its trading statement in advance of its half-yearly results for the period ended 30 September 2019, which will be announced on 26 November 2019.

Price Chart as on 27 September 2019, before the market close (Source: Thomson Reuters)

On the back of strong financial performance and operational progress achieved by Viridor Limited and South West Water Limited, the two subsidiaries of the company during the six-month period, and also taking into consideration the imminent start of the new K7 regulatory delivery period to which the company’s other subsidiary  South West Water Limited is subject to and the short and medium-term growth opportunities for Viridor, the board of the company has come to the conclusion that now is the appropriate time to conduct a full review of the company’s strategic objectives to choose between the different growth options available to it and construct an appropriate capital allocation policy to implement the chosen strategy.

The company is placed at a strategic and transformational standpoint from where the implementation of its strategy will bring in enhanced growth and value creation opportunities for its shareholders.