Hasbro Inc’s Acquisition Of Entertainment One Ltd: A Media Behemoth In The Making

On 22nd August 2019 Hasbro Inc, the world-renowned toymaker from United states of America, announced that it will be acquiring Entertainment One Ltd, a Canadian media entertainment company having a transnational footprint with presence in television, films and digital media. Though both companies have little in common, synergies arising out of the merger have the potential to create a global media behemoth.

Below is a brief of both the companies, followed by a look at their recent financial results. We take a look at their stock price performances and, finally, provide an outlook for the combined entity.

Entertainment One Ltd (LSE: ETO) is a Canadian media and entertainment company. Its businesses include production of films, television content, digital media content and advertising. The company has multinational operations, where it operates through subsidiaries that it has acquired over the years. The company owns multiple TV franchises and rights to TV shows around the world and owns distribution rights with many renowned film studios

The company is based out of Toronto Canada; however, its shares are listed on the London Stock exchange where they trade with the ticker name ETO. The company’s shares are also a part of the FTSE 250 index, of which it became a constituent in the year 2013.

The company on 23 August 2019 announced that it will be acquired by Hasbro Inc, the NASDAQ listed, largest toymaking company in the world. The deal will be an all cash one and will be valued at approximately £3.3 billion or US $4.0 billion. In the statement released by the company it provided further insights of the transaction. The management of the company has stated that the deal will result in a win-win situation for both parties as they will be able to optimize on each other’s strengths leading to value creation beyond what each one of them is capable of achieving individually. (Hasbro Inc broke the news first on the 22 August 2019).

Updates of Entertainment one Ltd for the financial year ended on 31 March 2019. 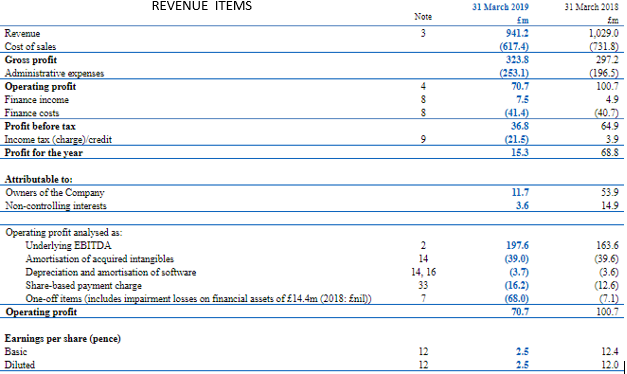 (Comparative chart of the stock with the relevant index YTD, Source – Thomson Reuters)

The stock of the company has outperformed the FTSE 250 index consistently since January 2019 till the time of writing of this report. A sudden spike in the price of the stock is witnessed on 23 August 2019, when the deal was announced by the company.

Stock performance at the London stock exchange over the past 5 days.

Daily Chart as on 27 August 2019, before the market close (Source: Thomson Reuters)

On 27 August 2019, at the time of writing of the report (before the market close, GMT 08.30 AM), ETO shares were trading on the London Stock Exchange at GBX 584.0. After the news broke, the stock jumped by more than 30 percent higher in trading on the London Stock Exchange on 23 August, 2019 to reach its 52-week high of GBX 616.00 before coming down to its current levels (as seen in the stock price chart above).

The takeover deal will give both the companies a strategic leverage to create significant value in the media and entertainment space. Both companies own popular brands in their respective business areas. With the leverage gained from each other’s expertise in their respective areas, the potential for value creation will be immense. The advanced market of the United States of America will be the new working center for the combined entity.

Hasbro Inc (NASDAQ: HAS) is an American manufacturer of toys and board games. It is the world’s third largest toymaker in terms of revenue and the largest in terms of market capitalization. It is the owner of world-famous brand names like Monopoly, Power rangers, Transformers and G.I Joe. Apart from that it also owns the TV show Family Game Night that runs on Discovery Family channel. Majority of the company’s toys and other products are manufactured in South Asia.

The company was founded 95 years ago in 1923 and has its headquarters in Pawtucket, Rhode Island, in United States of America. It is a publicly traded company with its shares listed on the NASDAQ where it trades with the ticker name HAS. The company’s shares are also components of the NASDAQ – 100 index and S&P -500 indices.

The company on 22 August 2019, announced that it will be acquiring the Canadian media and entertainment major Entertainment One Ltd for a deal approximately worth between £3.3 billion or US $ 4.0 billion. The deal will bring the robust portfolio of brands belonging to Entertainment One (for example, Peppa Pig, PJ Masks, Ricky Zoom, etc) to the folds of Hasbro Inc. The company believes that the acquisition will enhance its capabilities by building on cost-synergies and in-sourcing between both the companies, thereby enhancing the future growth opportunities of the combined entity.

The company recently filed its 10 Q statement with the Security and Exchange commission of the United states of America, detailing its second quarter financial performance of the financial year 2019-20, ended on 30 June 2019.

The company’s net earnings per common share (diluted) for the three-month period ended 30 June 2019 was 11 cents per share, while for the corresponding three-month period ended 1 July 2018 it was 48 cents per share. The company for the quarter period ending 30 June 2019 declared a cash dividend per share of 68 cents while it was a dividend of 63 cents that was declared for the corresponding prior-year quarter ended 1 July 2018. 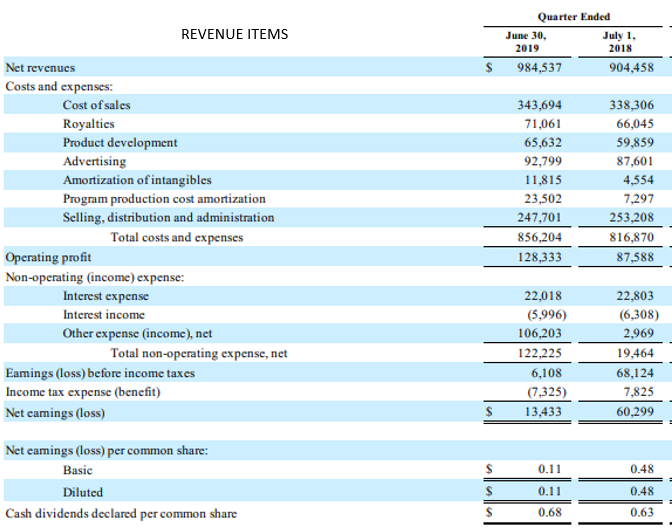 (comparative chart of the stock with the relevant index YTD, Source – Thomson Reuters)

Stock performance at NASDAQ in the past 5 days.

(Daily trading chart, as on 27 August 2019, before the market close, Source – Thomson Reuters)

The Chief Executive Officer of the company, Brian Goldner, in a conference call with analysts, opined that eOne adds story-centered global family brands to the company’s portfolio and that his company will leverage eOne’s immersive entertainment capabilities to augment the company’s own brands and reach audiences on all screens from distribution, to broadcast, and to new media platforms, including video streaming.

The statement of Brian Goldner speaks volumes about what the company’s plans are for the new combined entity. With Hasbro’s long and successful history as a company, it will be able to take the new entity’s fortunes to even greater heights.