A lens on 5 NZX retailers amid the prevailing lockdown

Considering the restrictions and lockdown situation across Auckland, as well as the rest of New Zealand, many NZ retailers are witnessing a setback owing to the Government's decision on what is essential and non-essential and what can be sold during these uncertain times.

NZ Government classifies what is essential during alert levels

A detailed health order was issued by the NZ Government, wherein it laid out a huge list of the essential items which can be sold during alert levels, such as necessary clothing, bedding, footwear, medicinal and hygiene products, etc., whereas non-essential items were exercise and outdoor recreation equipment, beauty, and entertainment products, etc.

However, many non-food items too were considered essential since they aimed at keeping people safe and healthy as they continue to remain within the confines of their homes.

This has greatly affected business sentiment.

Having said that, let us take a peek into the five NZX retailers in prevailing times of NZ lockdown and restrictions. 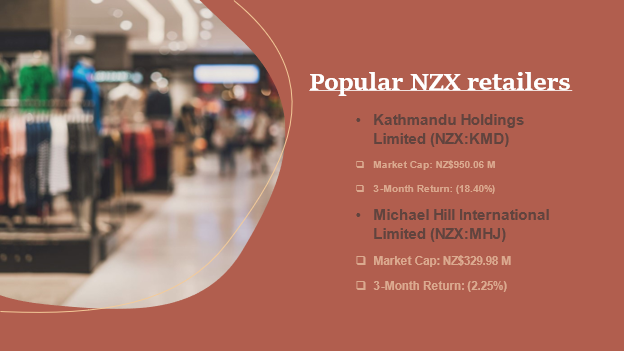 Established in 1987, Kathmandu Holdings Limited is a famous retail store selling apparel and sports equipment. The Company has urged its shareholders to send the director nominations by 23 September.

Nominations can only be sent by those shareholders who are permitted to attend and vote at KMD’s Annual Meeting.

Related Read: Are the 5 NZX retail stocks benefitting amid the pandemic?

Founded in 1979, Michael Hill International Limited is an international retail chain of fine jewellery. Owing to resilience shown by the Company during the pandemic and a record rise in digital sales, MHJ experienced a spectacular FY21 performance.

It will pay a final dividend of AU3.0 cps on 24 September, thus taking the full-year dividend to AU4.5 cps.

Briscoe Group Limited is New Zealand's leading retailer of homeware and sporting goods. Recently, the Company has announced its half-year results ended 1 August 2021, wherein the Company witnessed a 22.58% growth in its total sales, amounting to NZ$358.4 million. Its NPAT stood at NZ$47.46 million, up 69.63%.

The said dividend would be paid on 14 October, with the record date being 21 September.

BGP expects an NPAT of up to NZ$85 million, subject to no further lockdowns or outbreaks across the country.

Functioning as the largest general merchandise retailer across Kiwiland, The Warehouse Group Limited has recently given a leadership update. The Company has revealed that Tim Edwards, its Chief Sales Officer, has stepped down from his role last week.

WHS CEO Nick Grayston has acknowledged Edwards' contribution in significantly transforming the Company’s business and has updated that WHS’ sales function is in a strong position.

Cooks Global Foods Limited is the country’s famous retailer of food and beverage, supplying fresh and quality food. The Company has recently declared that it would hold a virtual Annual General Meeting on 28 September.

Its Executive Chairman would comment on CGF’s FY21 performance in its AGM.

On 20 September, Cooks Global Foods traded flat at NZ$0.043, at the closing bell.

With the whole nation placed under alert levels 2 and 3 owing to the resurgence of the pandemic, NZ businesses are under pressure as to what can be sold and their sentiments towards lockdown seem to worsen as time goes by.