Penny stocks, as the name suggests, are micro stocks worth less than a dollar. Being cheap, they are sought-after by small traders and beginners to the stock market, for they often carry the potential to outperform mid- and large-cap stocks.

Further, they do not burn a hole in their investors’ pockets.

That said, let us take a peek at the top penny stocks of the year 2021. 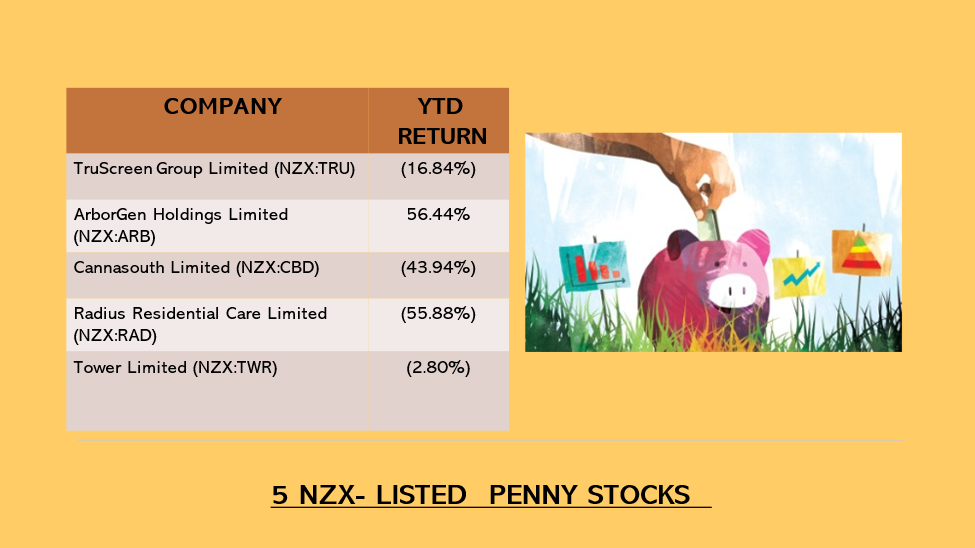 Related Read: Which are 5 NZX penny stocks that ended in green?

It continues to expand further in the Chinese market, thus providing an uplift to its revenue. Further, it has successfully forayed into the Central and Eastern European markets supported by clinical trials and evaluation initiatives.

The Group continues to focus on its product improvement and rapid expansion strategies.

Its cash position stood at NZ$3.67 million towards the end of the reporting period.

ArborGen Holdings Limited is a leading provider of advanced genetics for the forestry sector. A few days back, the Company announced the completion of the sale of its ArborGen’s New Zealand and Australian businesses for NZ$22.25 million.

Interesting Read: Do 4 NZX penny stocks have potential to be multibaggers?

The above move was a result of the strategic review being undertaken by ARB.

On 7 December, at the time of writing, ArborGen Holdings was trading flat at NZ$0.255.

New Zealand’s famous supplier of medicinal cannabis is Cannasouth Limited. It has recently revealed its entry into an unconditional agreement to take over the remaining stake in its JV business, for a total purchase price of NZ$3,540,000.

After the completion of the leftover stake, CBD would have a 100% stake in the JV's cultivation business, thereby resulting in improved efficiencies across the Group and also would result in increased profitability for its shareholders.

On 7 December, at the time of writing, Cannasouth remained unchanged at NZ$0.370.

Radius Residential Care Limited offers quality rest homes and private hospital care for the aged population of the country. The Company reported an underlying EBITDA of NZ$11.2 million for the half-year period ended 30 September, owing to record occupancy levels throughout the reporting period.

A Quick Read: How are NZX retirement villages stocks doing in December 2021?

On 23 December, it would pay an interim dividend of 0.7 cps and has forecasted an underlying EBITDA between NZ$21.5 million to NZ$23.0 million for the full year.

The rest home operator aims to continue its growth phase spearheaded by a clear and deliverable strategy.

Tower Limited is a leading general insurance provider across the nation. It would conduct its Annual Shareholder Meeting on 2 February, which can be attended both in personal as well virtually.

Must Read: Which 5 NZX dividend stocks under NZ$5 to consider in 2022?

Moreover, TWR has revealed that the director nominations could be sent latest by 13 December.  However, nominations for the same can be made by only those shareholders who are eligible to attend and vote at the above-mentioned meeting.

Investors are often enticed to invest in penny stocks. However, with the stock market being highly volatile, investments in stocks must be made after a careful and thorough analysis.