Real estate, especially commercial real estate, is likely to face tough road over the near term, given the economic contraction and lack of demand. It is anticipated that broadly property values would come down along with rental yields on commercial properties.

But investors are likely to prefer prime locations, sustainable revenue streams and tenants with longer lease terms. Retail space demand has fallen across markets after the lockdowns enacted by governments.

Retail companies have been engaged in rental waivers with their landlords, which have impacted the cash flows of commercial real estate firms. Some companies have also entered administration processes, while many have also embarked on reducing the store footprint.

It is likely that retailers are going through a structural change as more customers are getting inclined to prefer online retail services in the wake of the pandemic. Omni-channel strategies by retail companies would hold demand for new spaces as capital expenditure recovers during expansion.

Office assets are also expected to witness a structural change because of increasing remote working culture at companies. Some companies may not retain all of the workforce back in office premises. However, it would take some time to play out at large.

The Reserve Bank of New Zealand has removed loan-to-value ratio restrictions to promote lending in the country. This move by the bank arrived after the downturn caused by COVID-19. Residential property prices have gained due to lower listings in April, but listings have picked up.

Good Read: Auctions and House Prices – Where are Kiwis heading?

Specialising in industrial property, PFI has a nationwide portfolio of 93 properties leased to 141 tenants. The company would release interim results for the period ended 30 June 2020 on 4 September 2020.

Early last month in July, PFI reported the divestment of an industrial property in Christchurch. In December 2019, the property was valued by the company, resulting in a valuation of $4.35 million. Under the agreement, PFI would sell the property for a gross sale price of $4.41 million. It was noted that funds from the sale would be utilised for pursuing value-add strategies. Settlement of the divestment is expected to take place in April 2021.

In June, the company convened its Annual Meeting, highlighting that PFI leased 100k square metres in 2019, comprising 17% of the portfolio to 24 tenants. It also completed rental reviews on over 100 leases, which gave average annual uplift of 4.6%.

The company progressed towards becoming a pure-play industrial property listed vehicle. It entered contracts for divestments of non-industrial assets for $40 million, and the company also secured four industrial opportunities in Auckland for $106 million.

In 2019, PFI delivered a profit after tax of $176 million, and adjusted funds from operations increased by 4.4% over the previous year to 7.79 cents per share. PFI paid cash dividends of 7.6 cents per share to the shareholders.

At the end of the year, its gearing was at 28.2%, and bank facilities of $300 million were also refinanced. Its net tangible assets also rose by 15.6% to 206 cents per share compared to the previous year.

In March this year, the company secured $50 million additional bank funding from its bankers, and it reviewed costs and investment plans while deferring some capital expenditure. PFI also engaged with its tenants, and a number of solutions were agreed with tenants on a case-by-case basis. 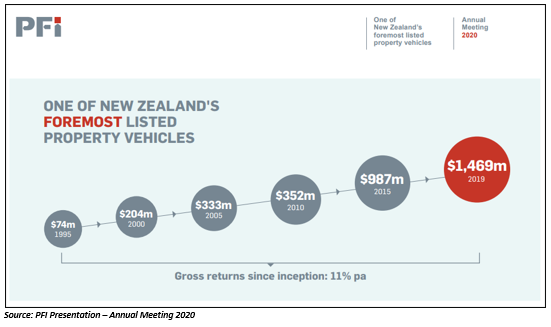 Due to the pandemic, the process of divesting non-industrial assets is on hold for now. As a part of reliefs to tenants, the company gave support of around 1.2% of annual rent.

At the end of the period, its portfolio value was $2.9 billion with an overall occupancy of 98%. Unaudited results for the period showed total assets of $3.21 billion, net equity of $1.9 billion, and net asset value per share was $1.50.

During the pandemic, the company continued to focus on business continuity. It also engaged with tenants and implemented a range of Initiatives to support the tenants. Precinct Properties stated that the company is confident of meeting the full-year dividend guidance of 6.3 cents per share, on account of its high-quality client base, high occupancy, and long-term weighted average lease term.

The quarterly update highlighted that the impact of the pandemic continues to evolve, but the company has been able to restrict its negative impacts on the business. Around 50% of its office revenue comes from investment-grade credit rating clients. Around one-third of the revenue is derived from Government/Crown entities.

Operating for more than 25 years, Kiwi Property Group owns and manages a significant real estate portfolio. Late last month, the company reported solid sales growth for June after the pandemic softened in the country with lower restrictions. June was a full month when businesses were operating after lockdowns in New Zealand.

In its shopping centre portfolio, adjusted sales were up by 7.5% over the same period last year, while total sales increased by 0.5% in June. The company’s top performing shopping centres rebounded along with large format retailers, on account of higher leisure and sporting spending by customers.

Do Read: Lens over House Prices and 4 NZX Stocks