The RBNZ announced the tightening of LVR restrictions for mortgages on 23 September. Beginning 1 November, banks will now be confined to just 10% of the new lending to owner-occupiers that account for over 80% of the value of the property.

The move will overly affect first-time buyers who receive over 75% of loans that were above 80% loan to value in July.

Amid this backdrop, let’s have a look at how these 5 REITs are faring. 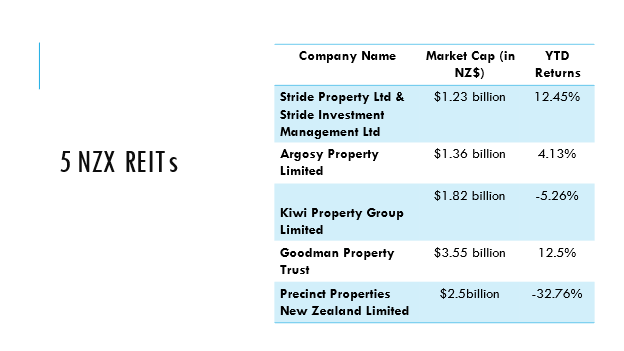 Precinct declared that the ultimate conversion price of the subordinated convertible notes (PCTHA) was $1.4. The price is determined by the lower of the $1.4 conversion price cap and a 2% reduction to the market price of $1.66.

Agreement, allotment, and the start of trading of newly converted PCT shares will take place on 27 September.

Argosy property announced that the strike price for Argosy's dividend reinvestment plan had been set at $1.5979. For FY22, the Group has declared a cash dividend of 1.6375cps, which will be paid on 22 September 2021.

In order to calculate the strike price, a 2% discount was applied.

Goodman property’s draft valuation reports showed that GMT’s property portfolio would post a gain of nearly $500 million in the first half.

As per GMT’s CEO, the results have shown strong property fundamentals and buoyant investment for warehouses and logistics sector assets.

DO READ: Top things to watch out for in New Zealand market today

KPG stated on Tuesday that it would begin construction on its first big build-to-rent project. Institutional landlords own and operate this type of property, which is mostly used for long-term rentals.

The 295-apartment complex will be erected in Auckland's Sylvia Park, and in the medium term, almost 1,200 flats are expected to be built on the property.

Stride's annual meeting results were announced on Thursday. Given the COVID-19 impact, the Group performed well in FY21. In the quarter, the profit after tax from continuing activities increased to $132 million, up from a loss of $0.1 million in FY20.

Total assets under management were $3.4 billion, which included all acquisitions and ongoing projects. In FY22, the Group intends to expand its investment management business.

It is yet to be seen how LVR tightening will fare out for the housing market.