Air New Zealand Limited (NZX:AIR) is an international network operator based in Auckland that offers passenger and freight services to, from and within NZ. Air New Zealand’s geographic emphasis and competitive edge lies within the Pacific Rim, where the network of the airline enters Australia, Asia, and the Americas from New Zealand.

Air New Zealand recorded the first yearly loss in about last 10 years due to the effects of COVID-19 and subsequent extensive travel and border restrictions on its business.

Earlier, this month, Air New Zealand reported a loss before tax and significant items of $87 million for the year 2020, running from July 2019 to June 2020.

Although, the airline carrier reported a solid interim profit of $198 million for the initial 6 months of the financial year, it witnessed a 74% fall in passenger revenue from April 2020 to June 2020 on pcp, which led to operating losses for the airline.

Some of the highlights of the results of the Company for July 2020 are as follows:

As per the investor update provided by Air New Zealand, short-term liquidity stood at about $1.1 billion, as on 25 August 2020, which comprised of cash and $900 million standby loan facility from NZ government. The airline has now begun drawing on the loan facility.

As per Greg Foran, CEO of Air New Zealand, coronavirus highlighted that the fundamental power of the airline is its people and their capability to respond to change rapidly.

He stated that the airline witnessed a heavy demand for domestic travel, especially into leisure destinations such as Queenstown in June and July and was running around 70% of its domestic network equivalent to coronavirus period.

He also added that the airline is much better placed for recovery than many of its airline peers but noted the need for being hyper-vigilant and protecting the competitiveness of the airline.

Air New Zealand has begun to drawing a $900 million COVID-19 support loan from the government and is likely to carry out capital-raising before June 2021.

The airline had revealed last month that it would need to tap into government loan to ride out serious loss in revenue caused by COVID-19. The loan will give the government the right to ask for repayment via capital raising after 6 months period or convert the loan to equity, with an interest rate of 7-9%.

In a trading update dated 25 September, Air New Zealand stated that the Company has been evaluating various scenarios on how the COVID-19 pandemic may build up and affect business operations, fleet, operating cost structure, and capital requirements.

The Company is likely to finalise the strategic capital structure review by early 2021 and complete the capital raising before June 2021, taking into consideration that there are no further major unfavourable developments.

INTERESTING READ: Potential Resumption of International Travel in Australia: A Subject of Debate

As per the Company’s update, the government loan supplied Air New Zealand with the required liquidity assistance as it worked on future business plans post coronavirus. The government loan or Crown Standby Facility (CSF) was negotiated just before the lockdown in March.

The update also stated that CSF was planned by both Crown and Air New Zealand to give the airline, with the necessary time to relocate its operations and simplify the execution of a long-term capital structure.

Air NZ also stated that the NZ government had reiterated its pledge to uphold its majority shareholding in the airline and the Airline management is participating productively with the Crown in its capital structure and funding talks.

The management did not provide any specific guidance for 2021, but the airline is likely to experience a loss due to considerable uncertainty and travel restrictions.

Mr Walsh stated that reducing the workforce of Air New Zealand by 4,000 workers was vital for the survival of the airlines amid COVID-19 and it was quite a painful decision for them.

The airlines management is working on Kia-Mau strategy, which translates into ‘get ready’, and would be centred around 5 points, as mentioned in the below figure. 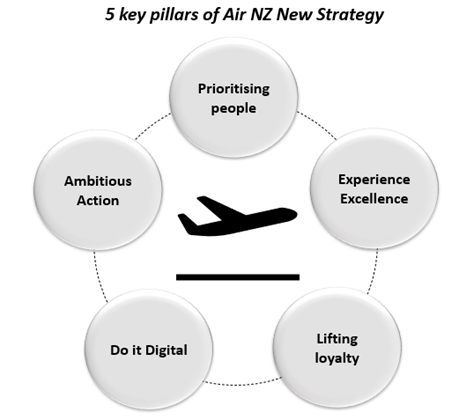