How are 5 NZX retirement stocks faring amid delta variant outbreak?

The sudden surge of the delta variant of COVID-19 has triggered a fresh streak of fear and concern amongst the people of the country.

Retirement villages like other industries are ensuring that people are safe and secure amidst the level 4 lockdown imposed by the Government.

Let’s cast a glance at 5 such retirement stocks and see what they have been up to lately. 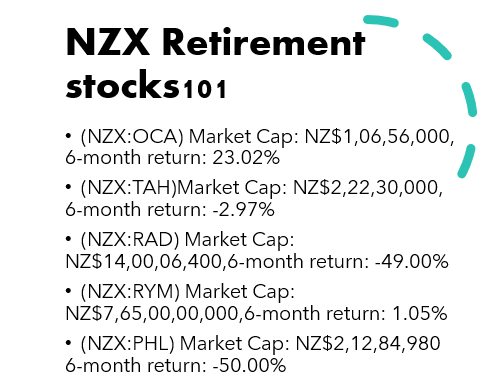 With years of experience in the period of aged care, the Company is known for its various retirement villages across the country.

Lately, it announced two major appointments, Rob Hamilton, and Peter Dufaur as new additions to the team. Both joined as non-executive directors on 17 September 2021.

Read more: Which are 10 major healthcare companies trading on NZX?

Of late, it announced a date change for the settlement of an acquisition, which was set to occur on 1 October 2021 for Belmont Medical Centre Limited. The date is postponed to when the country moves to the level three lockdown alert.

Change of settlement date for acquisition due to COVID - NZX, New Zealand’s Exchange

The organisation offers specialised care for the elderly, with a staff strength of about 1700 people across 22 branches in the country.

Recently, the Company announced new banking facilities, which will lead up to taking the existing debt of the company to NZ$62 million and various plans for the next five years to support acquisitions, development, and growth.

Read now: Are these 10 best healthcare companies on the NZX?

This is one of the leading retirement village providers in the country with over 11,600 residents from both New Zealand and Australia.

In a recent update about the Company’s management changes, Jeremy Moore, the Chief Development Officer, shall take up the role of New Zealand Land Acquisition Manager part time. On the other hand, Richard Umbers has been appointed new Chief Executive Officer for the Company and shall take charge in the month of October.

Don’t miss: How many villages does Ryman Healthcare (NZX:RYM) have?

Another huge name in the league of retirement home providers in the country, Promisia Healthcare, is known for specialised medical attention for various needs.

In the latest announcement made by the Company, the breach of one of its two banking covenants, as of in the quarter ending 30 June 2021, was acknowledged.

Retirement villages, like most other organisations, are working towards safeguarding their elderly residents against the highly contagious Delta Variant of coronavirus.