There's no denying the fact the good financial companies are the backbone of any country as they play a huge role in infusing liquidity to the economy helping the country make financial  decisions and investments. Have a look at some noteworthy financial stocks in the country. 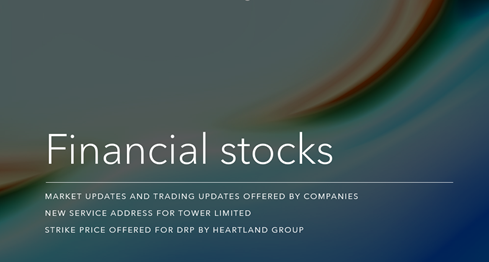 Also read: Which 5 penny NZX stocks are in green

This Company offers different kinds of insurance for various requirements such as home, car, travel etc. Announced in the end of last month, the Company now has a new office and service address. It was added by the CEO, Blair Turnbull, that the new space is created for a progressive, collaborative environment for better performance.

This Company offers financial services through different sectors such as homes, businesses. Etc. In its recent announcement, the Company offered a strike price in relation to its DRP plan at NZD2.27125669 with the exchange rate determined at 0.9624.

Read now: Which are 5 hot NZX dividend stocks to explore in September 2021?

This Company primarily invests in a number of growing Australian Companies. In the latest monthly update, the Company said that its gross performance went up by 9.7% while the adjusted NAV return recorded was up by 9.2%. The update further revealed its company-wise returns for the month of August 2021.

Don’t miss: Which are the 5 buzzing NZX financial stocks?

Functional since 2002, the Company is known for its lending services to SME and Consumer credit formats. In the trading update released by the company recently its pre-tax profit for the period till September 2021 show a rise of 16.4% on PCP, standing at NZ$3.3 million. The annual meeting was announced to held virtually today that is 15 September 2021.

Financial stocks have been making stable gains over the past year despite the COVID-19 related challenges.