How have 5 NZX financial stocks performed in 2021?

The financial sector of a country is one of the most significant sectors of its economy as it offers financial services to people and businesses. Financial firms include banks, lenders, finance firms, real estate, brokers, etc.

Amid this backdrop, let’s look at the performance of these 5 NZX financial stocks this year. 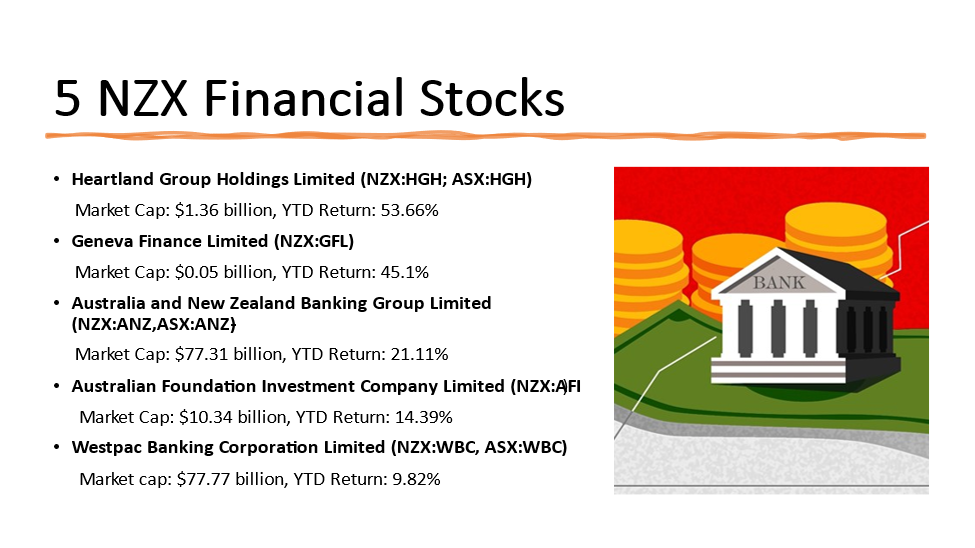 Heartland Group reported $87 million as its NPAT and grew its finance receivables by 8% to $5 billion in FY21. The bank was also named Canstar’s 2021 Bank of the Year - Savings for the fourth consecutive year.

RELATED READ: Which are top 5 NZX financial stocks to explore in 2021?

The Group is still on track to fulfil its $93-$96 million revenue target. Heartland’s GHG emissions were 17% lower than its emissions for FY19.

New business originations in every trading entity of GFL showed good strength in the first 4 months of the period. With lockdown curbs imposed in August, trading was attained at reduced levels. GFL paid an interim dividend of 1.25cps on 30 November.

ANZ’s main division, Australian Retail & Commercial, grew pre-provision and after-tax profit in FY21, resulting in a high-margin performance. The bank's home loan revenue increased by more than 10% in H2, despite a drop in the total amount of home loans on its books. It saw the strongest performance in NZ.

ALSO READ: 2 NZ insurance companies that can be followed ahead of 2022

ANZ intends to launch ANZ Plus in 2022 and a digital home loan product by the end of 2021.

AFIC provided an update on 3 December. It noted that net tangible asset backing before tax stood at $7.55 per share as of 30 November 2021.

The S&P/ASX 200 Accumulation Index closed 0.5 lower in November. There have also been concerns about global inflation that pushed the market lower as the US CPI increased faster than expected.

Following the withdrawal of businesses, the closure of products, and the streamlining of fees, Westpac enjoyed significant growth.

WBC more than doubled its profitability year over year, with cash earnings rising 105% to $5.4 billion.

Due to low interest rates, severe competition, and a significant shift to fixed rate mortgages, the bank's mortgage lending growth was recovered, but its margins were down 7 basis points.

The financial sector of NZ remains well positioned to fight any severe crisis and remains supportive of the economy.