New Zealand has become the first country across the globe, mandating its financial firms and institutions to disclose and act prudently on risks and opportunities associated with climate and related issues.

It is noted that on passing its third reading, the Financial Sector (Climate-related Disclosures) Amendment Bill is hugely expected in helping the country to achieve its commitment for net-zero emissions by 2050.

Further deliberations on the bill’s strategy and targets will soon follow.

Amid the given backdrop, let us now delve into the popular NZ-listed financial stocks. 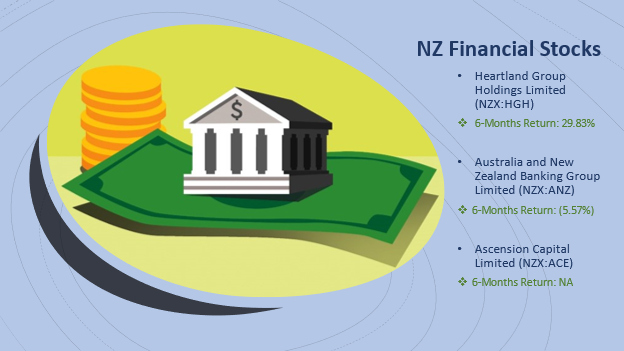 First on the list is Heartland Group Holdings Limited, which is the largest reverse mortgage provider in New Zealand. On 28 October, HGH has declared to organise an online Annual Shareholder Meeting.

Also, the Company intends to pass various business-related resolutions in the ASM.

We would now talk about Australia and New Zealand Banking Group Limited, the leading banking group across Australasia. The Company has notified its stakeholders that due to remediation and restructuring expenses, its statutory and cash profit (after tax) for the second half of 2021 would significantly be impacted by NZ$129 million.

It is pointed out that on 28 October, ANZ would publish its annual results for FY21.

Do Read: Why these 4 NZX value stocks are worth following in October

Last on the list is Ascension Capital Limited, functioning as an investment company. In its recently held ASM, the Company carried out a resolution for the re-election of its retiring director, John Cilliers.

Also, directors were given authority to determine BDO, ACE auditor’s remuneration for the upcoming year.

Must Read: How Crucial Is NZ Finance Sector’s Role In Climate Change? A Look At 5 Related Stocks