The re-emergence of COVID-19 in New Zealand has given a further setback to the country’s tourism sector, which had already been severely hit by the pandemic since March 2020.

The NZ authorities are still not ready to open the country’s borders entirely to other nations, though, they plan to open their shores in a phased manner in early next year.

The Ardern-led Government is considering opening quarantine-free travel to vaccinated tourists from low-risk countries from Q1 of 2022.

With this backdrop, let us take a quick glance at the five NZX tourism stocks worth watching for in 2022. 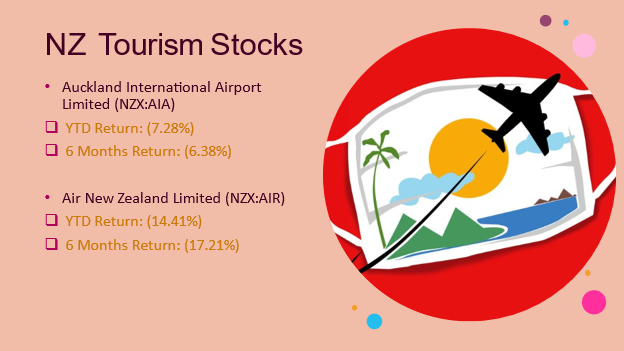 Infact, Ms Carrie would be the first Chief Executive in the history of the Auckland Airport. She would assume office early next year.

Air New Zealand Limited has released its investors' update for August 2021 wherein it had reported having carried 503,000 passengers in the said month, up 43.9% when compared to pcp.

Also, it has intimated all its stakeholders about the departure of its Chief Operating Officer, Carrie Hurihanganui. Further, AIR would hold a virtual ASM on 28 October.

Must Read: Five NZX travel stocks to look at amid border closure and paused travel bubble

Tourism Holdings Limited is NZ’s famous provider of rented holiday vehicles. Owing to the climb in the cases of Delta variant in NZ, on 21 October, THL has scheduled its virtual Annual Meeting of shareholders.

Here, THL intends to pass resolutions related to the re-election of its directors as well as fixing the auditor’s fees for the forthcoming year.

Related Read: Is there any respite from pandemic to 3 NZX travel and tourism stocks?

Do Read: Which are 5 NZX technology stocks with healthy 6-month returns?

Also, the Board was authorised to determine Deloitte, its auditor’s remuneration.

Auckland-based, SkyCity Entertainment Group Limited is a famous gambling and entertainment company. Owing to the NZ Government's announcement of moving the Waikato region, including Hamilton CBD to alert level 3, the Company has closed its Hamilton-based facilities.

Moreover, its Auckland property too, remains closed in wake of the rising in Covid-19 cases across the city.

However, its Queenstown property continues to remain open with requisite safety and health measures being followed.

The ongoing pandemic has severely impacted all the sectors of the economy, with the travel and tourism sector bearing the maximum brunt. However, governments across the globe are aware of the situation and are taking necessary and cautious steps for the revival of the sector.