Which are 4 popular NZX food stocks to consider in 2022?

As per the latest release of Stats NZ, the country’s annual food prices jumped by 4.5%, which is the highest rise over 10 years.

The yearly food costs have witnessed a hike owing to a surge in tomato prices.

It is noted that tomato prices have nearly doubled between December 2020 and December 2021, with an increase of almost 99%.

However, the higher tomato prices were counterbalanced by relatively low prices of kiwifruit, avocados and kumara.

That said, this article will cover the four popular food stocks worth investing in this year. 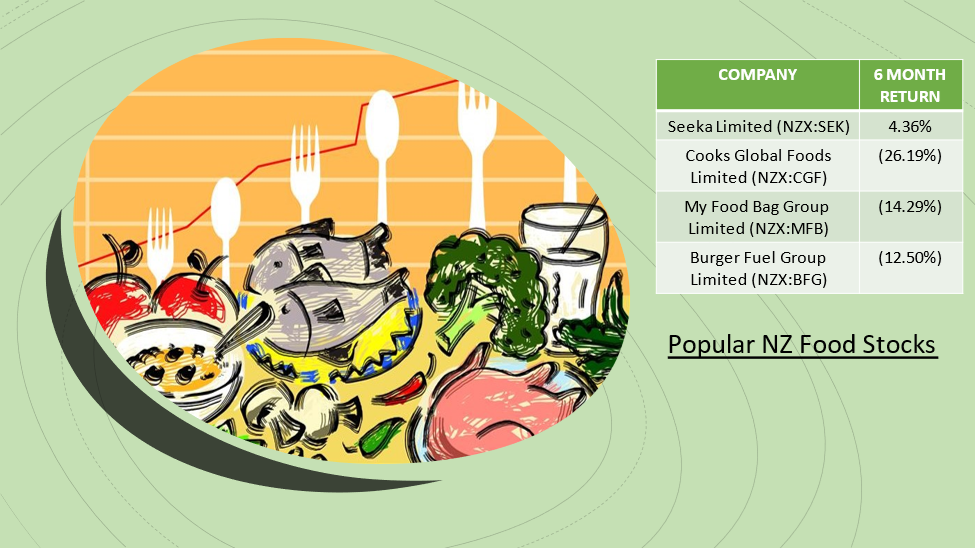 Seeka Limited has recently announced rewards for its shareholders by paying an FY21 dividend of NZ$0.13 per share.

On 23 February, the said dividend would be distributed, the record date is 28 January.

Further, SEK has revealed that early next month, it is likely to complete the acquisition by the amalgamation of New Zealand Fruits Limited.

The said capital raising was supported by both the existing shareholders as well as new investors and has been utilised to strengthen the Company’s balance sheet and cost reduction.

Must Read: Which 2 NZX food stocks can be considered amid inflation?

On 21 January, at the end of the trading session, Cooks Global Foods traded flat at NZ$0.031.

Paul would head MFB’s operations, procurement and logistics teams and will also be joining the Group’s senior leadership team.

He will take charge of his new position from 14 March onwards.

Also Read: Which are 4 NZX consumer stocks to be explored this year?

Also Read: Would these 5 NZX penny stocks take the market by storm in 2022?

Also, its group operating revenue grew by 15.8% when compared to the last year’s NZ$9.4 million, majorly on account of overall increased sales and additional revenue due to the opening up of a new store in Takapuna.

Further, BFG boasts a strong balance sheet position with zero debts and cash reserves of NZ$6.8 million towards the end of the reporting period and, at the same time, will continue to review opportunities for developing its existing brands.

Irrespective of the increase in prices of food, households tend to spend more money on the same owing to its essential nature.