Comvita Limited (NZX:CVT) is a Company known for producing premium, natural honey. Manuka Honey is the brand produced by CVT by having close collaboration with beekeepers with the aim of delivering good health to people.

On Wednesday, CVT released its annual report in which it stated that its journey had been good so far and that it was looking ahead to strengthen its business. Considering the hardships that last year brought upon the industry, the company has shown resilience and is on a path to future growth. 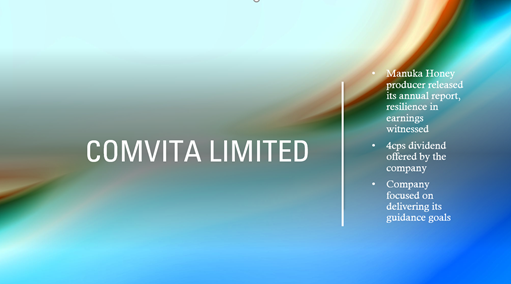 The company further said its focus was on delivering on performance using its three-part plan to bring momentum to the business. It is currently in the process of building trust among stakeholders by offering a stable foundation to the business for its long-term growth.

Read now: Which are 10 major healthcare companies trading on NZX?

The company offered a fully imputed 4cps dividend, which was indicative of the fact that the company had earned well enough to share gains with the shareholders.

The company further added there it was on track for its 2025 goal of bringing digital sales to 50% of the total business. David Banfield, the CEO of the company, said that the company was going out to deliver on its FY22 guidance and to deliver its new 60:15:50 model of function by the year 2025. He further said that the entire team had worked really hard to deliver those results and that was what had led to the profits.

Despite multiple challenges that the company faced in the previous year owing to the pandemic, from border closures to lockdowns, to everything that meant business losses for non-essentials, it survived. Rising concerns relating to the spread of the new Delta variant of COVID- 19, which has led to level 4 lockdown in the country, the company is making efforts to safeguard its business in order to weather this storm as well.