Let us look at some of the newest happenings garnering attention in Kiwiland. 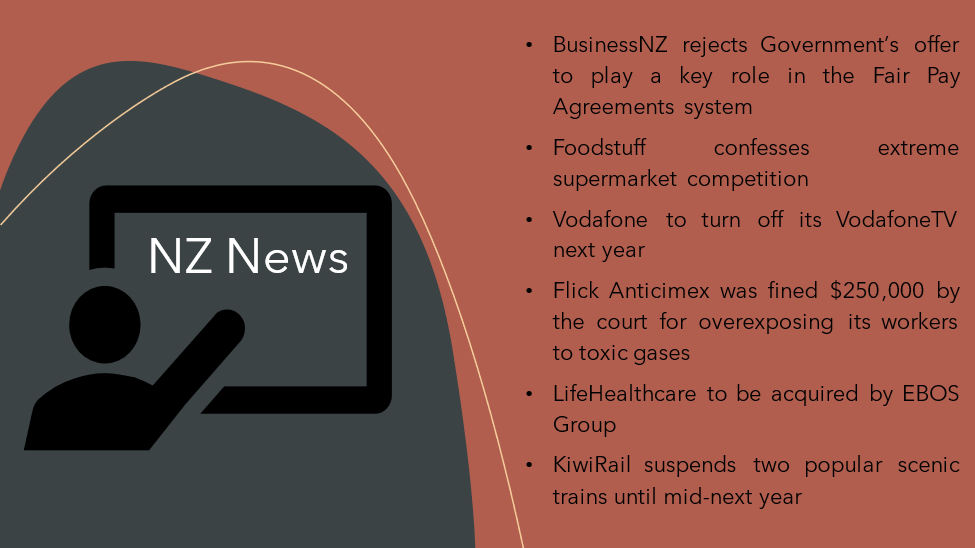 It is noted that the FPA scheme, which the national government is planning to launch, is a new mechanism to set minimum terms and conditions across an industry.

Business NZ chief stated that the said scheme would do more harm than good to businesses and employees.

As per reports, the biggest supermarket chain across New Zealand, Foodstuffs, has admitted the extent of competition in the country’s grocery retail sector.

It has revealed that shoppers can get attractive discounts, gourmet options, and faster deliveries if they shop elsewhere.

Vodafone to turn off its VodafoneTV next year

In the latest news, Vodafone has disclosed that it would terminate its VodafoneTV service from September 2022, thus marking an end of a television entertainment era that was once ruled by the company.

It is noted that refunds would be initiated for those customers who had purchased VodafoneTV boxes costing NZ$179.

Flick Anticimex was fined NZ$250,000 by the court for overexposing its workers to toxic gases

Flick Anticimex Ltd, a pest control business, has been levied with a fine of NZ$250,000 after failing to prevent workers from being exposed to methyl bromide, a toxic fumigant.

The Auckland District Court has slapped the business with a fine under the Health and Safety at Work Act, after the company failed to protect its workers from toxic gases like hydrogen cyanide and formaldehyde, apart from methyl bromide.

LifeHealthcare to be acquired by EBOS Group

EBOS Group Limited (NZX:EBO) has announced signing a deal to acquire LifeHealthcare, a medical device distributor, for a total purchase price of nearly A$1,167 million.

Do Read: EBOS Group (NZX:EBO): Why is it buying LifeHealthcare?

It anticipates that LifeHealthcare would generate EBITDA of around A$110 million-A$114 million in FY22.

KiwiRail has revealed suspending two of its famous scenic railway journeys by mid-2022.

Related Read: KiwiRail may have to pay a NZ$250,000 fine to Auckland Transport

The move was taken as there is continued uncertainty over the tourism sector owing to the COVID-19 pandemic and the emergence of new variants.