New Zealand Government announced the extension of wage subsidies as the lockdown is extended for another 12 days.

Under the level 3 restrictions for Auckland, citizens are urged to stay indoors, consumer-facing businesses will be shuttered till 26 August 2020. Authorities are trying to stamp out the first outbreak in three months. Across the country, level 2 restrictions are announced, which includes social distancing and gathering limits.

New Zealand's Prime Minister Jacinda Ardern said a wage subsidy program and mortgage payment deferral scheme would be extended. Still, the details will be out on Monday after the discussion with Finance Minister Grant Robertson.

A few days back, Robertson had met with the Treasury officials to discuss economic support for Auckland as the current level 3 lockdown extends. He said forecasting this scenario he had kept the NZ$14 billion aside.

In March, during the first round of wage subsidy, the Government paid NZ$585 a week per for full-time employees, and NZ$350 a week for part-timers. Till now the Government had spent about NZ$13 billion on wage subsidy scheme since March 2020. NZ$1.9 billion has been paid under the extension to the scheme from early June, states the data from Ministry of Social Development. The scheme was also available to the businesses that faced a 30 per cent drop in the revenue due to the health crisis.

New Zealand's run of 102 days without community transmission of the virus ended, forcing Auckland back into lockdown.

Prime Minister Jacinda Ardern announced lockdown decision as 14 new coronavirus cases were reported in Auckland on 13 August following by 12 more the next day. During a live press conference, Director-General of Health Dr Ashley Bloomfield confirmed new cases involving community transmission. The decision to extend the lockdown was announced on Friday. The 14 cases reported on 13 August were linked to 4 existing cases, which are now identified as a cluster. The total number of confirmed cases stood at 1,251 on 14 August (at 9:00 AM NZST).

Three cases are employees at Americold, and one employee works at Finance Now. There are three children age 1-14 and a teenage male age 15-19. One case visited a rest home in the Waikato before developing any symptoms. After testing positive for coronavirus, all of them in the community is required to isolate in a quarantine facility. One new case is also spotted in managed isolation. After the incident, experts believe that the virus could be in the community for weeks.

ALSO READ: Can masks make a difference to lives - NZ on COVID-19 Measures

After the Government announced Auckland is moving back to Alert Level 3, the travel restrictions have been now in place. Effective immediately, Auckland Council announced closed all its community facilities. Travel is allowed for specific essential personal movement in the area only. 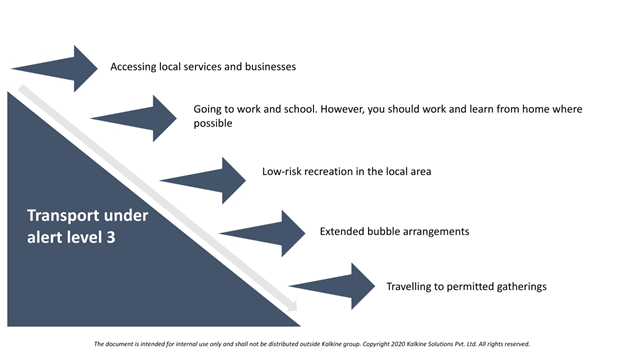 The Government has advised citizens to compulsorily maintain physical distancing of 2 metres outside the home, including on public transport. Wearing a face mask is a necessity.

Public transport is operational with strict health and safety requirements in place. The fares will continue to be charged, but cash payment is not accepted. The Government recommends registering on AT HOP card so that the Government can make any changes as per the demand. It will also help them during contact tracing. Buses, trains, and ferries will operate, and customers can make use of AT Mobile App and journey planner to plan the travel.

School busses will operate as usual on Wednesday to ensure children getting to schools and the 2 metres distancing rules do not apply to them.

New Zealand's Exchange will continue to communicate its BCP (Business Continuity Plan) status with Participants, Issuers and Regulators. This will provide assurances to stakeholders that NZX is expecting to perform all its essential functions. Even if the Government announced an extension to the current three-day lockdown in New Zealand or the levels is increased regionally or nationally, NZX would remain fully operational. NZX is monitoring and following the advice from the Government and the Ministry of Health, supporting them to avoid and reduce the risk of community transmission while considering the health and wellbeing of its people.