Impact of Earthquakes on NZ Economy

In the history of New Zealand, there have been only two times the Government has declared State of National Emergency. The most recently was at the time of Alert Level 4. And the first one was declared on 23rd February 2011. Can you guess why it was declared?

Well, the first State of National Emergency was declared when the country faced an earthquake of 6.3 magnitude in Christchurch. The damage caused by the earthquake was substantial.

Scale of the rebuild

The Reserve Bank of New Zealand estimated about $40 billion in 2015 dollars to fully reconstruct the damage caused by the earthquake. Over the time span of rebuild, total construction work to be completed was estimated to be $40 Bn (approximately) (in 2015 dollars).

This $40 billion was mainly consisted of two parts: 1) About $7 billion for infrastructure, and 2) Around $16 billion each for commercial and residential construction. 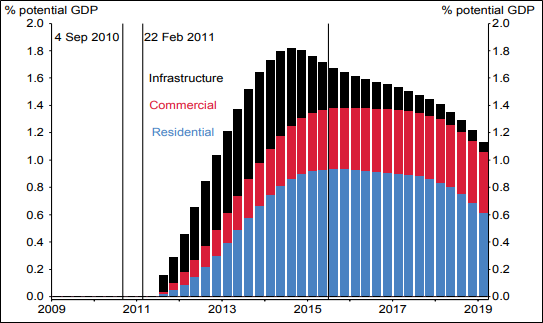 About 170,000 properties were damaged in the earthquakes, which accounts for approximately three quarters of Canterbury’s housing stock; the proportion was even higher within Christchurch City. Due to the unavailability of housing, there was a sharp rise in the house prices in the city of Christchurch. The prices of house were over 40 per cent higher as compared to pre-quake levels.  Because of the shortage in houses, the rents also increased significantly. 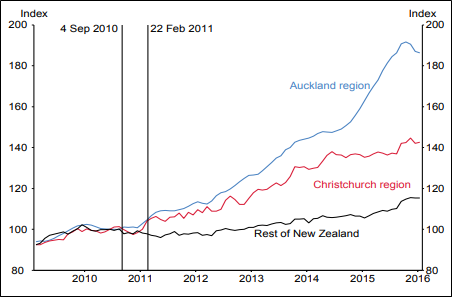 Population and The Labour Market

The Consumer price inflation of items that were housing-related witnessed a rise in Canterbury when compared to rest of country. A proxy for construction cost inflation increased significantly as compared to the rest of the country, topping at above 12 per cent at the beginning of 2013 in Canterbury, while staying below 2 per cent in the rest of the country. While other components of CPI (like footwear, clothing and recreation) were higher initially, the relative price differentials disappeared in the recent years.

The export numbers from Canterbury airports as well as seaports were not materially impacted as a result of earthquakes. The volumes improved soon after the earthquakes. However, the import volumes into Canterbury increased. This was witnessed because rebuild-related materials as well as replacement goods were brought in.

Despite resilience of much of the economy of Canterbury, there were 2 sectors which were impacted. There were tertiary education and tourism. The earthquakes adversely affected the accommodation available in Canterbury and destroyed over half of the hotel capacity.

Shaky Start To The Week In The North Island

The New Zealand country is prone to the earthquakes and Christchurch was not the first city to be destroyed by an earthquake. It is necessary to learn from the difficulties and achievements faced in the reconstruction of Canterbury to enhance future resilience in the country to face these types of events.