Following a decline of 1.4 per cent in August this year, manufacturing sales climbed 1.5 per cent to a value of C$ 53.8 billion in September, reported Canadian data agency Statistic Canada.

The increase in sales, the agency noted, was seen in 13 out of 21 industries and was led by those of wood, chemical and food. Manufacturing sales in constant dollars jumped about 2.1 per cent in September. This surge indicated that there was relatively larger volume of products sold in this month.

Sales in the manufacturing sector recorded a growth of 26.6 per cent in the third quarter of 2020 after four consecutive quarterly declines.

Despite the noticeable rise in September though, manufacturing sales in Canada remain 3.6 per cent below the pre-COVID levels in February.

Sales shot up by a significant 9.6 per cent in September to hit a record high of C$ 3.3 billion in the wood industry. The climb was driven by surges in the prices of lumber and other wood products and higher volumes of sales in the month, Statistics Canada noted.

The September manufacturing sales in the wood industry were about 32.1 per cent higher as compared to that in February. They also saw a 39.6 per cent year over year growth.

While sale of wood rose 6.7 per cent to C$ 4.5 billion in September in the chemical industry, it was up for the second consecutive month by 1.3 per cent in the food industry for the same month.

Alberta topped the charts in terms of manufacturing sales growth across the country in the month of September, according to StatsCan data.

Continuing its recovery since the pandemic-led March lows, manufacturing sales in Alberta climbed 3.9 per cent to stand at C$ 5.4 billion in September. And the climb, the report pointed, was pushed by higher sales of chemical and wood products in the province.

Sales in Alberta, however, dwindle 12.6 per cent below their pre-pandemic level from February and are down 11.6 per cent year over year. 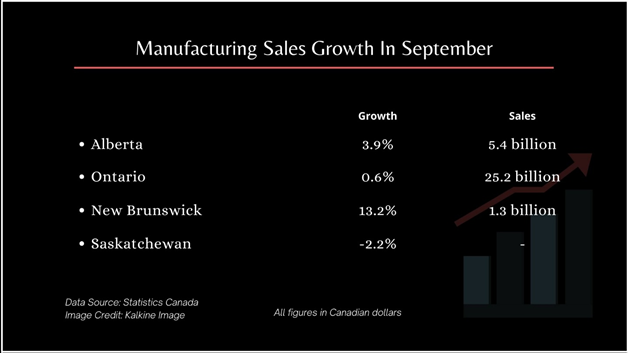 Right behind Alberta were Ontario and New Brunswick, with increased manufacturing sales of C$ 25.2 billion and C$ 1.3 billion in September, respectively.

Ontario’s September sales were up 0.6 per cent following a drop of five per cent in the month of August. The sales growth was noted in 14 out of 21 industries, led by a 4.2 per cent increase in the chemicals industry.

Saskatchewan stood out to record a decline in manufacturing sales in the month September, down 2.2 per cent triggered by a slump in the sales of non-durables goods.

As for metropolitan areas (CMAs), Toronto and Montreal registered a manufacturing sales growth of 8.2 per cent and 8.7 per cent respectively in the month of September. StatCan pointed that the gains in both the cities were driven by increased sales of transportation equipment and food products.

What About Inventory And Unfilled Orders?

Nevertheless, the numbers in September remained 0.7 per cent below their pre-pandemic levels in February.

Unfilled orders, on the other hand, spiked 0.3 per cent in September following a decline for five months in a row. The number grew in 12 out of 21 industries and were contributed mostly by increased unfilled orders in transportation equipment and primary metals industries.

What’s In Store Next For Manufacturing Sector?

The recent Statistics Canada report pointed that employment in the manufacturing sector grew by 68,000 in the month of September.

As for the coming months, the news of successful COVID-19 vaccine trials is likely to have an impact on the manufacturing sector. The hope fueled by drug companies Moderna and Pfizer, which report 94.5 per cent and 90 per cent efficacy of their vaccine candidates respectively, is likely to steam up demand and production of various goods.