NinjaFloki crypto rallies again, up 1,200%. What’s next for NJF token?

The NinjaFloki cryptocurrency was launched in 2021 and runs on the Binance Smart Chain. This is a play-to-earn game where the demo version has been released on the website where players can earn NJF tokens.

NinjaFloki is a cryptocurrency that aims to generate passive income through the play-to-earn game. Here, 3% of each transaction is distributed to the holders in BUSD (Binance USD is a USD-denominated stablecoin), based on the trade volume.

The team is in the process of developing the full game and currently, only the demo version is released on its website.

On the roadmap on the official site of the token, timelines are not given for different phases of the launch. The current phase 2 consists of activities including the NinjaFloki website game demo, audit, KYC, airdrop event, 20% NJF burning, Coinmarketcap listing, and social media and other marketing campaigns.

In phase 4, it plans to launch new NFT characters, full game on the website, play stores and app stores, celebrity marketing, and the announcement of the new roadmap.

As per the website, with more NinjaFloki in hand, a user can earn more BUSD with every buy and sell. A total fee of 9% will be deducted from the transaction where 5% will be for marketing, 3% for distribution among token holders, and 1% for adding to liquidity. 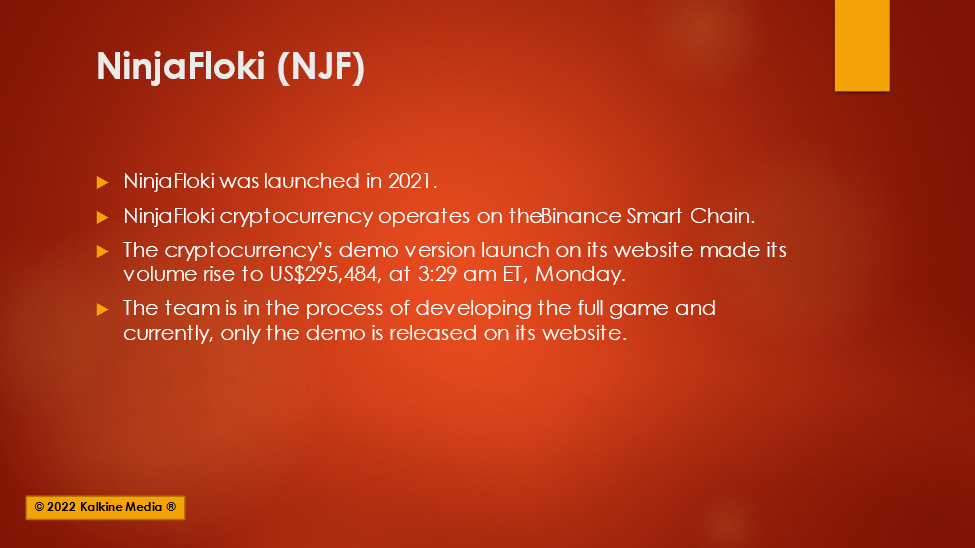 Also Read: Will these travel stocks beat the covid impact in 2022?

With the current market capitalization of US$5,471,907, its current coinmarketcap ranking is 3,626. NinjaFloki’s self-reported circulating supply is 80.00 billion NJF and the maximum and total supply stand at 100 billion NJF.

NinjaFloki crypto rallies again, What’s next for the token?

The NJF token has locked its liquidity on DxSale. There are more than 5,000 token holders now, as per the Twitter update.

Also Read: Five cybersecurity stocks to watch in the first quarter of 2022

The crypto market is volatile and the users must apply due diligence before investing in them as these can witness extreme ups and downs.