Based on drilling a well, the drilling can be classified into two broader categories: Onshore and Offshore drilling. To understand the basic difference between both, let us have a look below:

The drilling of an oil or gas well that is done on land is known as Onshore drilling. The road transportation network transports the drilling rigs, and rigs are placed on the ground. Mobile rigs or truck-mounted rigs are used also used in this type of drilling. The operating expense of onshore drilling is relatively less than offshore drilling as it doesn't incur any helicopter transportation costs of crews, additional shipping costs for living supplies, and food. The infrastructure to drill an onshore well can be constructed in a lesser time compared to an offshore structure.

Offshore drilling involves drilling of an oil or gas well into the water body, i.e., into the oceans. Offshore rigs like floating, drillship, semi-submersible, or Jack-up rigs are used in this type of drilling. The transportation of rig components is primarily done through mega-ships and carriers. The components are assembled at the location of the drilling, which requires additional time for the drilling to proceed. The operating cost of offshore drilling is much more than that of onshore drilling. Also, the operations are riskier than onshore operations. 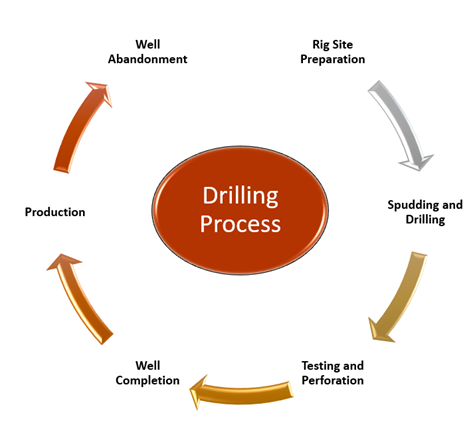 After reaching the first casing depth, i.e., surface hole, the well is cased with the help of a steel pipe known as casing. The steel casing is then cemented with cement to avoid the collapse of the wellbore allowing the company to proceed with further drilling. When the cement gets hard enough, the drilling process is resumed to drill up to the next casing depth. The depth of the next casing point, i.e., Intermediate Casing, depends on various factors like fracture gradient of formations to be drilled, mud weight, location of any lost circulation zones, and high-pressure zones, etc.

Once the final intermediate casing string is run and cemented, the drilling process is again resumed to reach the wellbore's final depth. After reaching the final depth, also known as total depth (TD), various logging tools are introduced into the wellbore to measure certain reservoir properties. Afterwards, cementation of production casing string or production liner is being undertaken.

Drilling Types based on Hydraulic Heads: