Financial abuse can take place across various sections of society such as family, corporates, groups, associates, nations etc. Someone essentially can use, acquire and maintain financial assets on behalf of others and stand to benefit from manipulative actions.

When someone has the full-liberty to use the financial resource of others, the chances of financial abuse are extremely high. Consider the companies with independent management and Board, who can manipulate the business financially while owners would not know since they are separate.

In most cases, financial abuse is generally referred to as the abuse of financial autonomy of one person, by manipulating the use of money, which was also destined for other persons in the family.

People can financially abuse public policy initiatives of Government by giving false information and taking more than actually deserved. Financial abuse can be present in many other ways like –

When a partner insists on taking control of money management within a family, and others have no right to make decisions, assets, on money matters. The decision will ultimately impact the whole family but are made with the consent of the only 1 person, who is perhaps abusing others financially.

Financial abuse involves perpetrators who are misusing money, limiting control and consent of others in the family.

The victims of financial abuse could remain incapable of fulfilling their own basic necessities, choices, and desires. These can include a choice of food, clothing, entertainment, holidaying etc. Financial abuse can leave victims without access to their own bank accounts. It leaves the person feeling isolated, depressed, anxious, and vulnerable. 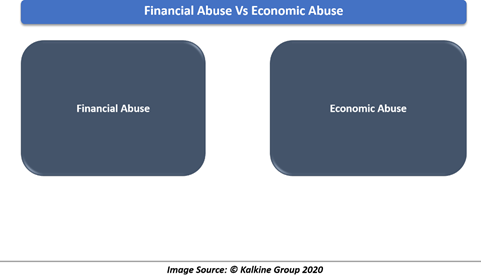 Economic abuse is a broader term and includes Financial abuse. Although financial and economic abuses are almost similar in nature, the basic difference is that Economic abuse can prevent the victim from gaining economic independence since the perpetrator controls earning potential by preventing them from getting a job.

Economic abuse is like getting full control of the victim. It’s a larger pattern of domestic violence and includes using victim’s money and creating debt on their names, and completely use the savings of victim without consent. Sometimes perpetrators can place the victim on a strict sum of money, while also forcing the victim to beg for further money.

Under economic abuse, the perpetrators also limit the use of resources by victims like vehicles or telephone. Most of the economic abuses start when the victims lack skill and education to be independent.

Older people are at a higher risk of financial abuse

Elder sections of society are generally more vulnerable to financial abuse by their family members. Financial abuse of seniors is a severe problem in many countries.

With rapidly developing technologies in banking, older people always remain at the risk of financial abuse since they are not generally comfortable in using the latest technology. Seniors of the society could be trained by their family members, who could also manipulate the training to benefit from the actions.

Elderly people can be financially abused in several ways such as

Family members who could be involved in the financial abuse of seniors can include children, spouse, grandchildren. There could be many motives of perpetrators behind financial abuse like insecurities that inheritance could be given to others, gambling addiction and so on.

How to prevent financial abuse?

Financial abuse can be prevented when people are proactive and vigilant. One should stay in touch with people who they trust and speak, these people may include friends and someone outside from family.

There should be no concerns when speaking out for yourself and sharing your problems. Keeping problems and concerns within the self will only translate into further mental stress.

Financial scams are growing and evolving rapidly, and one should not compromise learning how to evade financial scams. Over the years, financial scams and ways of executing them have evolved, and people really need to avoid such scams, which may leave victims in shambles.

The communications made by banks are faster than they were two-decade ago. It means one should regularly check emails dropped by the bank. Now checking bank and credit card statements has been easier over computers or phones, and people should constantly review these statements.

When someone is borrowing or lending money, it is better to have this agreement in writing with a plan and terms of repayment. Personal documents, including financial documents, account logins, passwords, usernames should never be shared with anyone and must be protected to avoid theft.

One should not sign a document, which is not understood by them. If the document is important, legal advice should be taken before considering a signature on a piece of paper, which could potentially become a reason for financial abuse.

When taking legal or financial advice, the preference should be given to a person who is competent and independent and is acting in the best interest of advice seeker.

Also Read: Major Banks Back in Favour But A Long Road Ahead