A debenture is an instrument through which an organisation raises loan from the market by issuing some certificates with the organisation’s seal and is known as Debenture Deed. Debentures are issued, just like equity shares, either through a private placement or offering to the public. Large companies generally raise fund through debentures without diluting the equity of the company.

Based on the nature of issuance and redemption of debenture, it can be issued with five possibilities.

Debentures are issued with a fixed rate of interest, and the interest amount is paid either yearly or half-yearly basis. The interest payable is a charge against the profits of the company, and like other debts, has to be paid in case of losses too.

What are the different types of debentures?

As the name suggests, Redeemable debentures are issued for a specified period, after which the company must repay the amount on a specified date.

Irredeemable debentures are those who have no specified fixed date for repayments. The debenture holders cannot ask for the payment as long as the company is operational and does not default on interest payment. They are perpetual in nature and are paid back usually when the company goes into liquidation. Companies normally issue redeemable debentures.

Bearer debentures are unregistered and unsecured bonds. The company does not maintain any record for the holders. Usually, a coupon is attached to the debenture certificate for the purpose of interest payment.

Whereas, Unsecured debentures are not secured by any charge or mortgage on any property of the company. Also known as 'Naked Debentures', companies with a good track record and strong financial standing can issue such debentures.

As the name suggests, Non-convertible debentures, are those where holders do not have any option to convert them into equity shares. 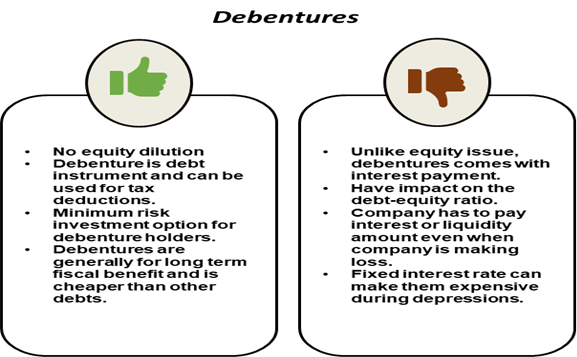 Investors try to maximise their return as high as possible. There are investors who have a higher risk appetite and invest in a high-risk portfolio. Debentures do not provide comparatively high returns on investments but provide a fixed and minimum risk-return.

Investors with a low-risk appetite as that of a younger person should think of debenture as an investment tool having fixed income and minimum risks.

What made Northern Star (ASX:NST) shares gain 14% in a year?

Northern Star (ASX:NST) in talks for JV with Osisko Mining

Check out these nine stocks with over 10% dividend yield

2 TSX stocks that can double in a year