What is an anticipatory breach? 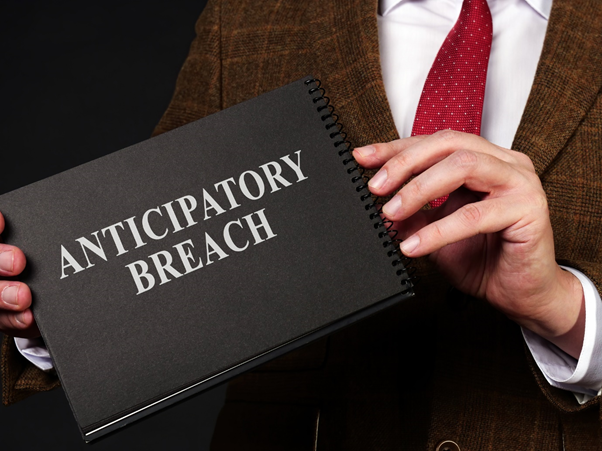 The breach happens when,

What is anticipatory repudiation? 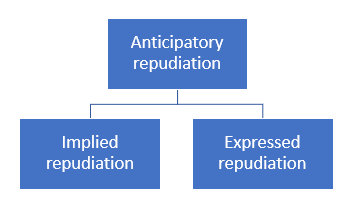 When either party fails to perform their duties because of a mistake in facts or law, it is not considered repudiation.

What are the types of contract breaches?

The majority of breaches fall under either actual or anticipatory breach. In both cases, the innocent parties are entitled to take actions to compensate for their losses.

Actual breach: This type of breach happens when a party clearly shows the refusal to perform his/her duties on the due date.

Anticipatory breach: This happens when a party announces before the due date that he/she will not perform their duties in future. It can also occur after the party partially fulfilling their responsibilities.

This is another category of a breach which can be further categorized into the material and minor breach.

Material breach: It occurs when one party performs considerably different duties than mentioned in the bilateral contract. For example, as per the contract, a party had to create written content for the official website of another party. But on the due date, party presents the video content instead of the written content. It results in a material breach.

Minor breach: When a party cannot deliver all the duties specified in the contract, it is called a minor breach. To clarify, the contract states that the duties should be performed by 1 January 2020, but it is delivered the next day. Even if the delay is justified with a strong reason, it is still categorized as a minor breach.

What type of anticipatory breaches are recognized by the court?

Expressed repudiation: When a party indicates a clear refusal, either written or verbally, to perform their contractual duties.

Transfer of assets: Assets necessary to fulfil obligations are either disposed of or sold to a third party by a party. Under the section of breach by transfer of assets, the law states several requirements. If a party is anticipating that the breach might occur in the future, then the party has the right to get reassurance that contractual obligations will be fulfilled on the due date. Till the reassurance is received, duties and payments can be paused. If reassurance is not offered within 30 days, then the contract is declared breached officially.

What are the remedies available after an anticipatory breach?

The remedies in case of a breach depend on the reason for the breach and the loss suffered by the promisee.

Cancellation – The affected party can cancel the contract if the other party produces the information in advance that they won’t be able to perform. The contract is cancelled when the failure to perform occurs due to operational reasons or facts.

For example, a manufacturer promises to deliver the manufactured products to the retailer on a specified date. However, due to road construction, the delivery cannot be done on a specified date. The manufacturers communicate the same, and the contract is cancelled due to operational reasons. Moreover, in such a case, the retailer can also ask for a refund against the advance amount he/she paid while entering into the contract.

During an anticipatory breach, both parties should undertake all the measures to minimize damages. Before taking legal actions, the affected party can also ask for compensation for their damages.

For example, a person took a health policy and has to pay a specific amount every month to enjoy the benefits of a health policy. During the third instalment of payment, the person declares that he/she will not be able to make payment in future. In such a case, the insurance company can take legal actions and compensate the damages faced. Failure to deliver obligations give the right to the affected party to act for recovering damages.

No reaction – After an anticipatory or actual breach, the affected person might do not take any actions against another party. The reason for the same can be to maintain strong relationships and to continue working with each other in future as well.

For example, a baker and a retailer come into a contract. In the contract, it is specified that the baker will deliver the products on a pre-specified date. But due to the non-availability of raw material, the baker cannot fulfil his/her commitment. Knowing that the baker cannot deliver on the promised day, the retailer might choose not to take any action and will bear the losses to maintain a healthy relationship with the baker.

How does a court deal with a breach?

The court asks the affected party to prove that they would have performed their duties if a breach did not occur. If the court concludes that both parties were not in a situation to perform their obligations, then the compensation might reduce.

3 most expensive cryptos in cryptoverse by per token price

PLA, CEEK and UOS: 3 metaverse cryptos under US$1