What is an altcoin?

An altcoin is any digital currency other than Bitcoin. The word altcoin is made using two words “alt” meaning alternative and “coin” indicating a cryptocurrency. Thus, it is any alternative cryptocurrency to Bitcoin and uses blockchain technology to facilitate peer-to-peer (P2P) transactions. The altcoins also require a mining process where all the miners solve complex mathematical problems, and web-based transactions are carried out securely. 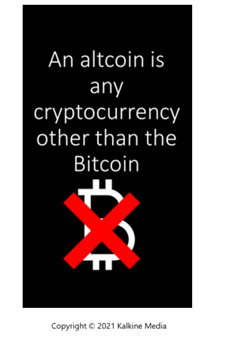 Some other examples of altcoins are discussed below:

Ether was first launched in July 2015 by Vitalik Buterin and Gavin Wood. It is the cryptocurrency or the fuel of the Ethereum network. Its model aims at securing a consumer’s personal data (including finance records) in a blockchain network, such that no third party or a company has access to it.

Dogecoin was launched in December 2013, and its logo has the image of a Shiba Inu dog. Billy Markus and Jackson Palmer introduced this currency. It is considered a sarcastic meme coin and is similar to Litecoin.

In 2011, Litecoin was launched by former Google employee and Coinbase engineer Charlie Lee. Similar to Bitcoin, it is used as a payment network not controlled by any central authority. It takes lesser time to mine an LTE block in comparison to that of Bitcoin.

Stellar is a cryptocurrency founded in 2014 by Stellar Development Foundation. It is an open-source code used to transfer digital currency into fiat currency across countries. It was built to link customers, banks, and the payment systems quickly, seamlessly, and safely.

The NEO cryptocurrency was founded in 2014 by Da Hongfei and Erik Zhan and was called AntShares. It was rebranded as NEO in 2017. It enables the development of decentralized applications (DApps) to facilitate secure and quick transactions.

What are the various types of altcoins?

Some of the altcoins do more than exchanging money for goods and services. Some other types of altcoins are mentioned below:

On the contrary, there are pre-mined coins that are distributed rather than created—for instance, Ripple.

Some of the advantages of altcoins are mentioned below:

Some of the disadvantages of altcoins are mentioned below:

Some of the platforms to trade altcoins are as follows:

This is not an exhaustive list of exchanges trading in altcoins.

What is Arcade Network crypto? Is ARC token worth buying?

How many cryptocurrencies are there?

What is Lossless crypto? Is LSS token a good buy?

What awaits the cryptocurrency market this year?