Small-cap stocks are believed to favor investors seeking a faster-growing company, yet these stock prices are generally traded at lower price points than large-cap stocks. Investors are observant while investing in these promising small-cap stocks, considering the reward-to-risk ratio and volatility of the stock price before investing and adding them to their portfolio for long-term goals.

Let us explore some of these small-cap stocks for long-term goals. 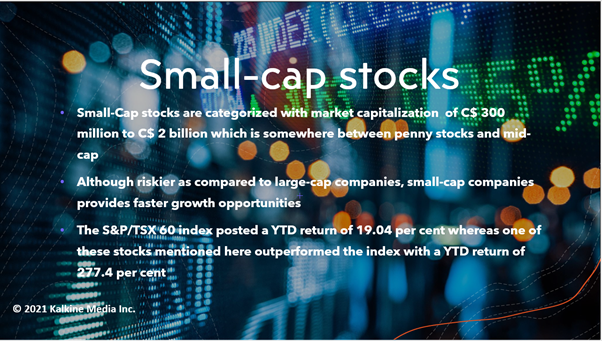 The mining company also launched many environmental, social, and governance activities to control the waste volumes.

Also Read: Got $10? 3 stocks to explore before July ends

Sernova is a healthcare company in the clinical stage of developing a cure specifically for type 1 diabetes and other diseases. As per the latest press release, Sernova Corp. collaborated and signed a research agreement with the University of Miami to strengthen the research on Cell PouchTM.

This oil and gas company explores and produces natural gas and liquids and other oil and gas products. Birchcliff Energy, on October 1, will issue a quarterly dividend of C$ 0.005. The dividend yield was 0.29 per cent (at the time of writing).

On a YTD basis, the stock price of Birchcliff Energy climbed up by 277 per cent and by 295 per cent over the past year. The stock price was C$ 6.68 apiece at the market close on September 16.

In Q1 FY21, the average production posted by Birchcliff Energy was 75,065 barrels of oil equivalent per day (boe/d). Its net income to common shareholders was C$ 22.2 million in Q1 FY21.

This metal and mining company explores and develops resource-based projects and mining properties. Neo Lithium operates in both Canada and Argentina. The company held outstanding shares of 141.34 million and a market cap of C$ 675.62 million (at the time of writing)

One of its core projects, the 3Q project, develops high-quality lithium brine. As per the senior leadership of Neo Lithium, it produced battery-grade lithium with 99.9 per cent purity. The lithium carbonate manufactured has been accepted to develop batteries by Contemporary Amperex Technology Co. Limited (CATL).

On September 16, the stocks of Neo Lithium were priced at C$ 4.78 at market close. Over the past year, the stocks rocketed by close to 513 per cent. However, on a quarter-to-date (QTD) basis, stocks increased by 65 per cent.

Investing in small-cap companies offers certain advantages in terms of higher and faster growth potential and a possibility to trade the stocks of these companies at lower price points.