Because industrial companies manufacture equipment and such for other companies and don’t serve the consumers directly, these stocks may see a fall in price during times of inflation and recession, when expansion plans may be cast aside.

This year has had the factors needed to turn the market bearish toward industrial stocks. The Dow Jones Industrial Average is down nearly 14 per cent year-to-date (YTD) and the S&P/TSX Capped Industrials Index has lost 10.55 per cent YTD.

However, let’s look at some stocks that have been outperforming the sector.

Avcorp serves the aerospace industry and AVP, at a cost of C$0.105 at market close Thursday, May 19, is a penny stock. Penny stocks can sometimes zoom quickly.

It has gained 74 per cent in the last nine months and for this year it is up over 28 per cent. In the last week it surged eight per cent.

EFN closed the trade session Thursday at C$13.70. It has risen nearly 18 per cent over the last month.

This year, it is in the green by 6.4 per cent and in the past week it has returned about 10 per cent.

EFN has a price-to-earnings (P/E) ratio of 17.8, suggesting the numbers of dollars needed for investing for each dollar’s gain. Its dividend yield is 2.26 per cent.

PVR has mostly had a downward trajectory this year but looks to be on the rebound. It closed Thursday at C$2.42. 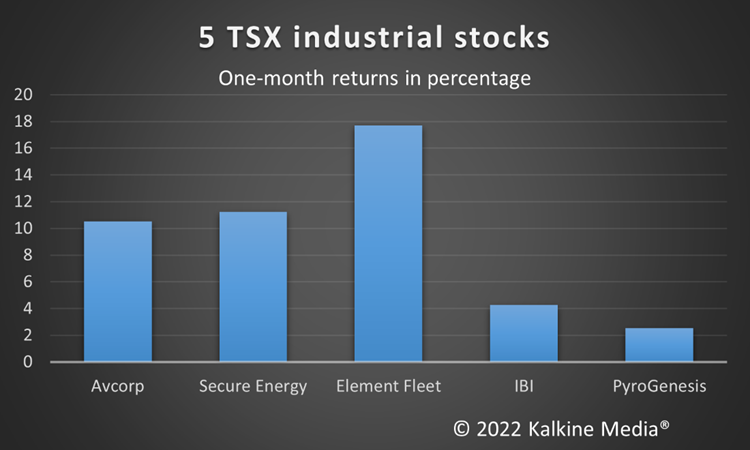 Of course, depending on the industry, industrial stocks can vary. Some the valuation metrics of some of the above stocks are in negative territory.

However, as the graphic shows and compared to the sector in general, these stocks may be called outperformers. Some may be volatile too and since they are subject to market forces, much research is needed before considering investment.