Massive floods and landslides in British Columbia, Canada, have crippled the entire transportation, leaving the delivery system for essentials like grains and food disrupted. Access to the Port of Vancouver has also been blocked, which is disturbing as about half of the country’s shipments go through Vancouver.

Although the government is working on stabilizing the situation, the disruption of the supply chain likely to have a significant impact on the economy.

With crops being an important part of this supply network, let us have a quick look at two TSX-listed grain-related stocks that have been performing well.

AGI saw a notable demand for its agricultural products this year, which led to 11 per cent year-over-year (YoY) surge in its trade sales of C$ 313.859 million in the third quarter of fiscal 2021.

Its adjusted EBITDA dropped by 11 per cent YoY in this quarter, which was primarily due to the expected increase in input costs.

As for its stock performance, AGI saw its share price grow by nearly 23 per cent in the last three months and soar by almost 13 per cent over the past year.

The Minneapolis-headquartered firm recorded a revenue of US$ 208.371 million in the first quarter of fiscal 2021, which was up from that of US$ 172.097 million in the same quarter a year ago.

CRP stock climbed almost 21 per cent in the last week and surged by about 30 per cent year-to-date (YTD). It delivered a return of approximately 55 per cent in the past 12 months. 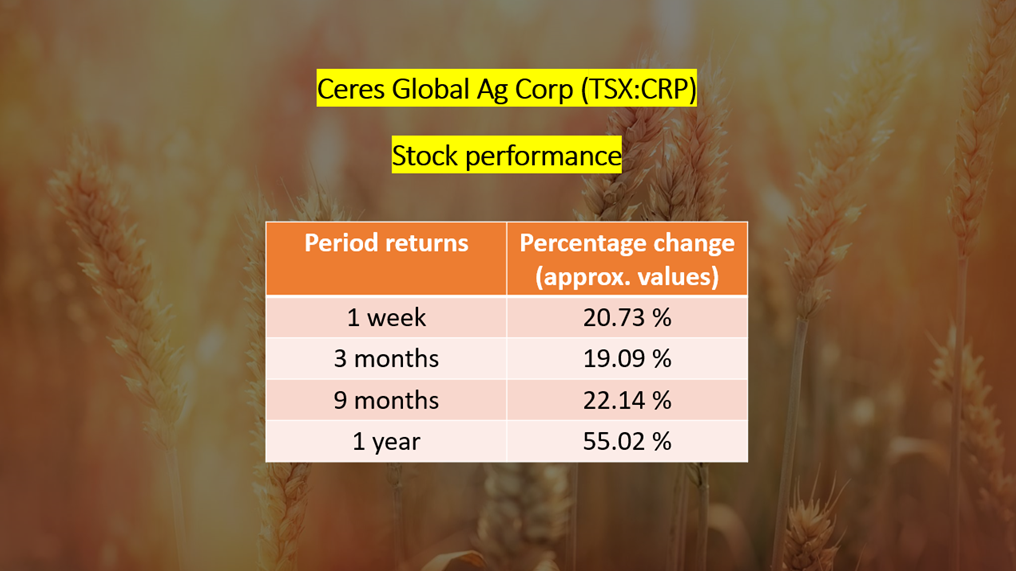 The Canadian agriculture sector is said to be one of the biggest grain exporters around the world. However, factors like floods, droughts and other natural disasters can impact its operations significantly.

At the same time, they can also increase their demand to a certain extent and, in turn, impact their prices.