Having closed at C$ 100.83 on Thursday, NA stocks were trading about one per cent higher at C$ 102.25 apiece at 9.55AM EST on Friday, following its earnings release.

Let us look at how National Bank performed in Q1 FY2022.

The Montreal-based bank said that its net profit expanded by 22 per cent year-over-year (YoY) to C$ 932 million in Q1 FY2021, while its income before provisions for credit losses (PCL) and taxation was C$ 1.18 billion (compared to C$ 1.04 billion a year ago).

The C$ 34-billion market cap banking company saw its diluted earnings per share (EPS) climb by 23 per cent YoY to C$ 2.65 in the latest quarter.

National Bank of Canada also posted a Common Equity Tier 1 (CET1) capital ratio of 12.7 per cent and a leverage ratio of 4.4 per cent under Base III at the end of Q1 FY2021. 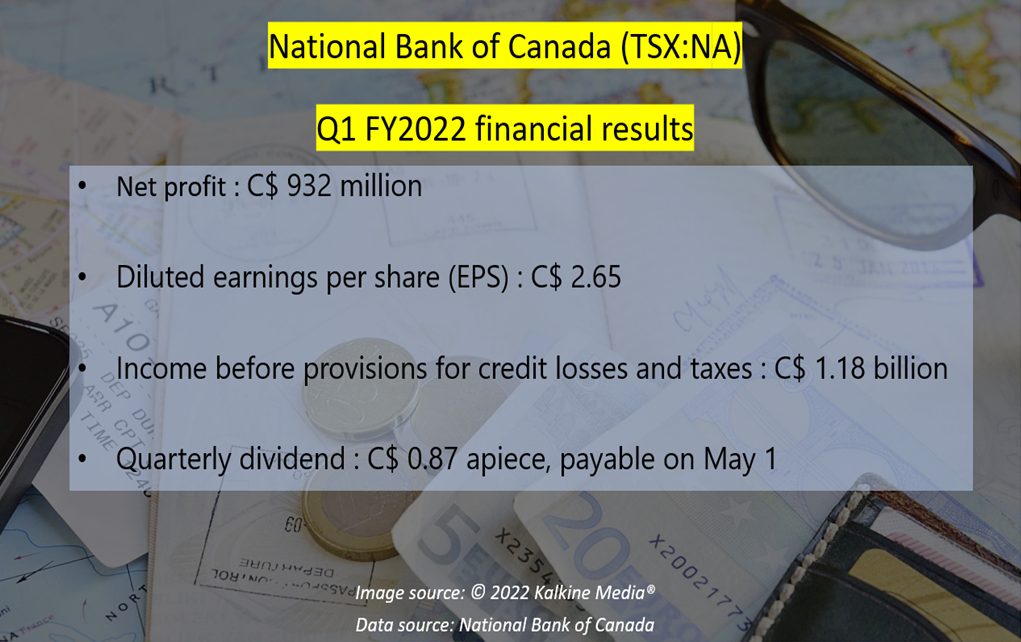 How has National Bank of Canada stock been performing?

Stocks of National Bank gained by almost 27 per cent in the last one year.

National Bank of Canada, with approval from its Board members, has announced a quarterly dividend of C$ 0.87 apiece for Q1 FY2021, which will be payable on May 1.

Also read : Can you buy Medicago stock as its vaccine gets Health Canada nod?