As Canada is known for its energy and manufacturing industry. But it’s food industry, which is the second-largest contributor to the Canadian GDP, is also popular among investors.

Every month, the sector adds nearly C$ 27.13 billion to the GDP boosting economic growth and prosperity. The industry also employs the highest number of Canadians, adding to the employment rate and figures.

Here are few Canadian consumer stocks that investors can consider looking at:

MTY Food Group offers fast food, casual dining, and quick-service restaurants. Its business model consists of both company-owned and franchisee restaurants, which are mostly located in the food courts of mall, business centers, airports and so on.

One of the top consumer stock, MTY stock has 24.71 million outstanding shares and a market cap of C$ 1.73 billion.

The company distributed a dividend of C$ 0.18 apiece. The dividend yield is 1.08 per cent, while the five-year dividend growth is 14.19 percent.

Meals kit company Goodfood, which offers complete set of items from the farm to grocers for cooking ready to eat meals, has seen its fortunes rise amid the pandemic.

The company has a higher forward EV/EBITDA of 86.58x versus the industry median of 16.85x. It is expected that revenue would reach C$ 391.19 million, as per Refinitive data. 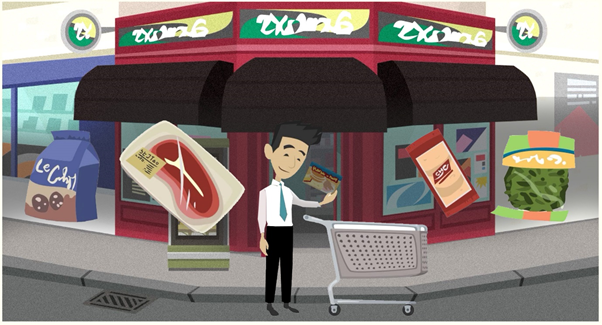 The net profit margin is 15.10 per cent, which is higher than its industry peers. The ROE stands at 20.87 per cent higher, also than the industry players.

The stock gained over 30 per cent in the last one year, and is up nearly 19 per cent YTD.

The stock holds a higher net margin of 76.99 per cent while ROE stands at 8.50 per cent. The company rolled out C$ 0.055 apiece as dividend to its holders in June.

Dollarama is a online discount retail store operating with 1,368 stores in Canada. The company opened 12 new stores in the first quarter of this year.

The stock price has jumped nearly 17.83 per cent in one year and up over is trading between its 52-week low and high prices.

The company witnessed a net profit margin of 14.02 per cent, merchandise margin of 43.80 per cent. These margins are higher than its industry comparables.

The dividend yield is 0.36 per cent, lower than industry average of 1.1 per cent. The five-year dividend growth rate is 8.57 per cent.