Canada has some interesting cannabis stocks that are some of the biggest of its healthcare sector. Over the past nine months, these stocks have seen some volatility. However, the idea with marijuana stocks might be to think long-term.

Its legalization at the federal level in the US seems inevitable, although it’s hard to say when. Some European countries too might be jumping onto the green bandwagon. So, you might call this a budding industry, pardon the pun.

HEXO is easily the smallest company by market cap on this list. Its market cap is C$167 million. Its stock closed Wednesday at C$0.365.

Down 91.5 per cent in nine months, it likely spent most of this month so far in undervalued territory. It has gained 5.8 per cent in a week and is now possibly on the brink of being undervalued.

Tilray has a market cap of C$2.7 billion and it ended trade Wednesday at C$6.17. Its down 63 per cent in nine months.

Over the last week, it has zoomed nearly 17 per cent. Its price-to-earnings (P/E) ratio is 12.3, and this indicates the dollars to be invested to net each dollar of profit. 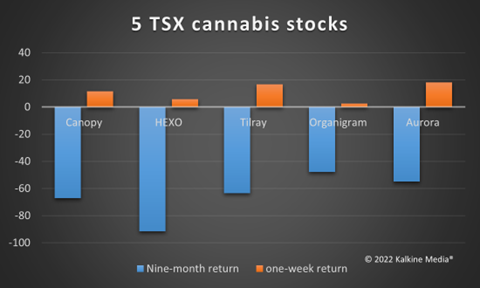 Last year, in November, the US Republicans said they were on board with federal legalization and tried pushing legislation through. However, the Democrats, wanted it to go further and sought retroactive pardons. Talks fell through and this seemed to be quite a buzzkill for the industry.

Only TLRY has a positive P/E ratio among these. However, these stocks may be looked at on a long-term basis.