Should Covid-19 be blamed in entirety for pot stocks trending bearish on TSX? On October 17, 2018, Cannabis legalized recreational cannabis for adults, but things did not get any better for the cannabis stock market in real terms.

After clocking an all-time high post its launch in the Canadian markets, pot stocks went south in 2019. The companies faced federal restrictions, cultivation hurdles, high product prices due to taxation, lack of efficient regulatory response system, and unrealistic valuation of firms. This was followed by a wave of bankruptcies, mergers and consolidations, write-offs in early 2020, before the pandemic hit.

From the Cannabis bubble burst in 2019 to finding new grounds of stability in the Cannabis 2.0 market, investors continue to be hopeful on marijuana stocks and believe it is just a matter of time when the tables will turn.

Several pot producers and distributors are counting hopes on the upcoming elections in the US, anticipating it will play a critical role in marijuana legalization movement across the world. Some analysts believe cannabis tax revenue and jobs in the medical cannabis market could contribute to economic recovery.

Canopy Growth is one of the largest Canadian cultivator and seller of medicinal and recreational Cannabis and hemp products. Its brand portfolio includes Spectrum Therapeutics, Craft Grow, Tweed and more. The company owns distribution and production licenses in more than 12 countries to drive its international expansion goals of medical cannabis across the globe.

In April 2019, the company announced plans to acquire US multistate cannabis operator Acreage Holdings Inc for C$3.4 billion. The deal was amended in September 2020 owing to slump in cannabis stock prices and Acreage’s financial troubles. The new amended arrangement values Acreage at about US$900 million and will include US$37.5 million payment in cash.

This amended arrangement provides Canopy an entryway into the US market, which may expand after the country legalizes recreational cannabis. Meanwhile, both companies plan to launch THC-infused beverages in the US cannabis market by the summer of 2021.

Year-to-date performance of the stock shows a decline of 4.43 per cent. As per data on the TMX portal, the company’s market capitalization is C$9.70 billion, and 10-day average trading volume of shares is 1.89 million.

However, the stock has gained over 12 per cent in the last three months and up 21 per cent in last one month. 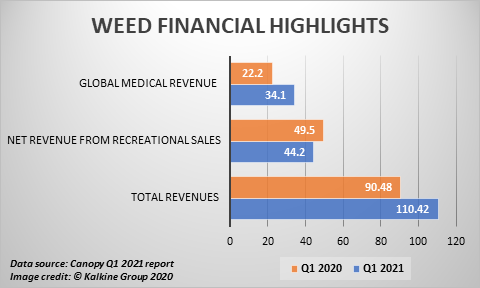 Edmonton-based Aurora Cannabis cultivates and sells cannabis for both medicinal and recreational use and markets them through a portfolio of brands including CanniMed, MedReleaf, Aurora, Whistler, Woodstock, Daily Special and San Rafael '71. The company has cannabis production facilities in more than 20 countries.

Miguel Martin was appointed as Aurora CEO earlier this year and a progress update on business transformation plan was announced on June 23. As per the plan, the company expects operation revenues for the first quarter of 2021 to approximate C$42 million. Through inventory revaluation, facility rationalization, and strategic acquisition of Reliva, LLC the company plans to enter the U.S market and become an international cannabinoid leader. It expects to improve its gross margins and generate positive cash flow this year.

Aurora stocks have lost over 81 per cent this year. In the last six months, the stocks lost near 50 per cent value as the company adjusted to the pandemic. As per data on TMX, the company’s profit-to-book (P/B) ratio is 0.176.

During Q4 2020, the company raised cash of C$48.3 million from the At-the-Market (“ATM”) program and C$33.7 million through the sale of its investments in Alcanna Inc., EnWave Corporation, and through sales of property, plant and equipment.