According to the preliminary data published by the ABS (Australian Bureau of Statistics), the retail turnover plummeted by 4.2% (seasonally adjusted) in August 2020, compared to the previous month. However, year on year (YoY), the turnover rose by 6.9%.

Almost all states of Australia witnessed a drop, with the highest decline reported in Victoria, impacted by the pandemic-linked restrictions. The ABS revealed that excluding Victoria, retail turnover across the rest of Australia fell by 1.5% from July 2020 to August 2020.

DO WATCH: Is retail sector getting out of the woods? 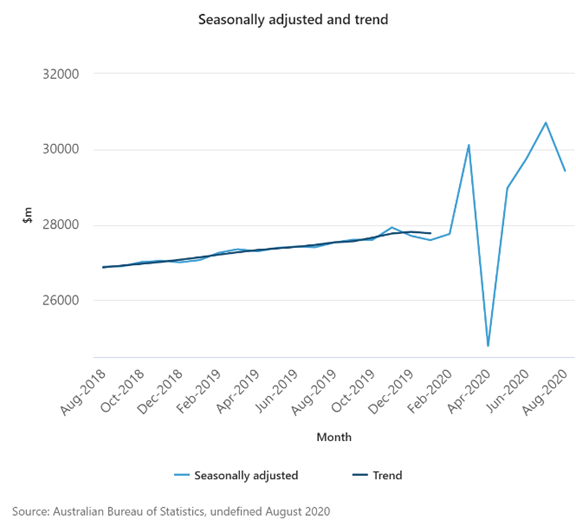 Let us skim through the August 2020 performance of some of the industries within the retail sector. We will also look at some related ASX-listed retail players and their recent performance:

The ABS highlighted that food retailing recorded a slight drop in August 2020. Amid the COVID-19-induced restrictions, the grocery and food stores remained operational but primarily to provide services online. The pandemic has had limited impact on retailers with online sales partially negating in-store sales. Let us look at a couple of players belonging to this segment.

Melbourne-headquartered Coles Group Limited operates multiple retail chains. The Company is primarily engaged in the selling of groceries and food via its supermarket chain, Coles. COL is also involved in liquor and petrol selling through its Coles Liquor outlets and Coles Express, respectively.

ASX-listed pizza chain operator, Domino’s Pizza Enterprises Ltd, is the largest franchisee of Domino’s outside of the US. On 19 August 2020, Domino’s updated the market with its results for the financial year 2020 (year ended 28 June 2020). Quick highlights are-

ASX-listed fashion shares were under the microscope as fashion retail spend declined in August 2020. The ongoing pandemic has caused a sharp decline in sales of non-essential items, particularly in fashion.

Lovisa Holdings Limited was established to fill the void for fashion-forward and jewellery that is affordable. The Company is now trading from 435 stores in 15 nations. On 21 September 2020, Lovisa Holdings updated its annual report for the financial year ended 28 June 2020, the highlights are-

ALSO READ: Changes that Retailers Should be Looking At; Lens on Jewellery Retailer, Lovisa

Accent Group Limited is engaged in the retail & distribution of footwear and apparel businesses. The Group has more than 420 stores across ten distinct retail banners and exclusive distribution rights across New Zealand and Australia.

Moreover, the Group is set to open its first physical store in Melbourne in the second quarter of FY2021, with an additional five stores to follow in the second half.