Mr Gavin Loyden, the Managing Director at QEM, stated that the successful outcomes at Julia Creek during the September quarter invigorates the company to advance the dual commodity opportunity towards pre-feasibility phase.

In fact, QEM is the only company currently positioned to develop a vanadium and oil combination project in Australia.

Why is this important?

Australia now imports over 90 per cent of its liquid fuel. Domestic refining capacity is decreasing with only four refineries remaining in operation nationally and that may reduce even further with Ampol announcing on 8 October 2020 that it may be closing its Lytton Refinery in Brisbane in the very near future. Viva Energy is considering the same for its Geelong refinery in Victoria, potentially halving Australia’s current capacity.

According to monthly publication Australian Petroleum Statistics, as of July 2020, Australia had 63 days of liquid fuel supply, which includes not only fuel stored in Australia, but also ships on the way here or sitting in overseas terminals.

This figure is well below the mandated 90 days which Australia should have in reserve in the event of any severe disruptions to supply.

The supply for petrol and diesel is even less, at 25 days and 20 days respectively. It is closer to 3 days’ supply at the local bowser for the general population, with the balance being required for industry and emergency services.

Australia is a signatory to the International Energy Agency’s 90-day reserve policy and has not been in compliance with this policy since 2012, leaving the country exposed to any external supply shocks that may arise. COVID-19 has further exposed this shortfall as a ‘significant risk’ to Australia’s national security.

The Federal Government is trying to address this issue by recently purchasing almost $100 million in fuel and having it stored underground in Texas in the USA, 8000kms from Australia. This initiative is welcomed but only goes a small way to resolving the issue.

QEM hopes to take advantage by providing a level of domestic fuel supply, including diesel for industrial and agricultural businesses from its Julia Creek Project. 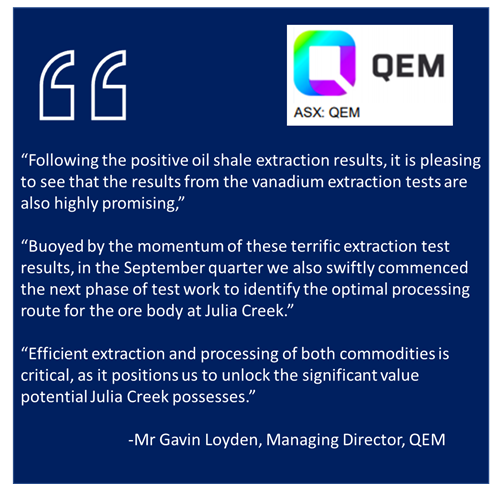 Vanadium is also important to Australia’s resilience and is regarded as a “Critical Mineral” by both the U.S. and Australian governments. As such, projects such as QEM’s Julia Creek Project can expect strong government support to help expedite development and streamline approval processes, as outlined in the Critical Minerals Strategy 2019.

Vanadium is vital to the production of high strength steel used in building construction, for tools, in automotive and aircraft construction, as well as many other uses.

The other high growth application for vanadium is in the production of Vanadium Redox-Flow Batteries or VRFB. These batteries are highly suitable for large scale grid support and have key advantages over Li-ion.

As renewables become more and more prevalent in the energy mix, so too does the need for large scale energy storage solutions, and VRFB is one of the leading technologies in this space. 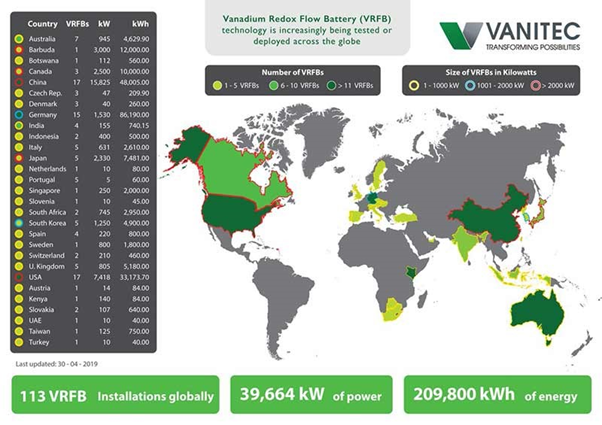 The recent extraction tests provided a strong foundation for the commencement of further tests in the September quarter to optimise vanadium extraction.

The test work results are anticipated to be finalised during the incumbent quarter, leading to engineering and costing activities, including the economic assessment of the integrated process.

Business Performance during the Pandemic Era

With a strong focus on the safety and health of employees and vendors, while also progressing the Julia Creek project, QEM experienced no material impacts from the ongoing COVID-19 pandemic to its business operations. QEM maintained and adhered to the government policies and directives to mitigate the risk of virus spread.

QEM holds a cash and cash equivalents of $2.244 million as of 30 September 2020 and is focussed to progress on exploration and development activities at Julia Creek.