Invictus Energy Limited (ASX:IVZ) is dedicated towards developing high impact energy resources in Africa. The Company is currently developing the Cabora Bassa Project in Zimbabwe. Invictus is the 80% owner as well as operator of the Project that comprises of the lucrative SG 4571 exploration licence.

Currently, the Company is the sole oil as well as gas operator in country and enjoys a distinctive position to make good use of its basin master spot in the lucrative Cabora Bassa Basin. 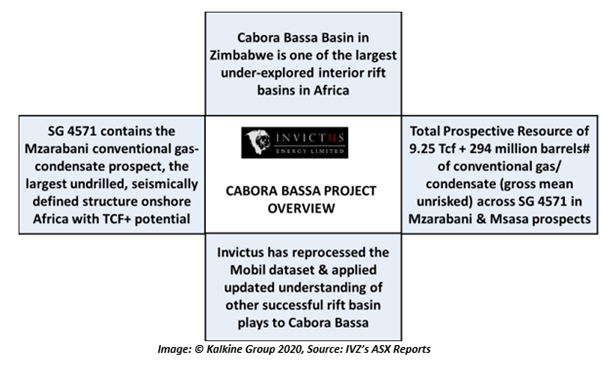 Amid COVID-19 and changing industry dynamics, Invictus has been successful in advancing developments at the Project. Having said this, the Cabora Bassa asset is well placed to benefit from the transition to natural gas as an important less carbon intensive fuel source in the energy matrix.

How is Invictus Placed in Changing Industry Dynamics?

The portfolio in Cabora Bassa has a major gas and liquids mix. It appeals to a broader range of energy industry partners as well as investors. Consequently, the Company believes that it is well-positioned to monetise the resource if proven to nearer term cash flow.

Besides, Invictus was successful in signing two MoUs in the past one year- with Sable Chemicals and Tatanga Energy. This is likely to help the Company secure a market, and lock in a premium value to near-term cash flow for ~ 15% of the likely gas resource (if the exploration campaign is successful).

Invictus Energy aims to be a major energy supplier in Southern Africa, which is currently combating a severe energy crisis. The Company firmly believes that if its exploration program is successful, there is a significant opportunity for Invictus to fulfil the region’s energy demand.

Impressively, there has been a progression from the primarily desktop studies phase to an on the ground activity phase of Invictus’ exploration campaign. Moving strategically towards its ultimate aim, Invictus has progressed on numerous fronts-

Invictus now plans to begin activities in the field including seismic acquisition and exploration drilling..

In the peak of the COVID-19 crisis, Invictus successfully brought in a local Zimbabwe Institutional Investor, the Mangwana Opportunities Fund.

The Company is notably making use of its sub Saharan knowledge of the wider East African Rift System and Permo-Triassic aged rifts. The focus remains on low cost conventional onshore or shallow water exploration that can be quickly and safely commercialised, at low cost.