During the quarter, the oil & gas entity progressed with the development of its Montney asset and continued to maintain the Tommy Lakes Facilities as planned. Moreover, the Company closed the quarter with a decent cash balance of A$2.3 million as on 30 September 2020.

Let us quickly gaze through the key developments reported by the Company during the September quarter below: 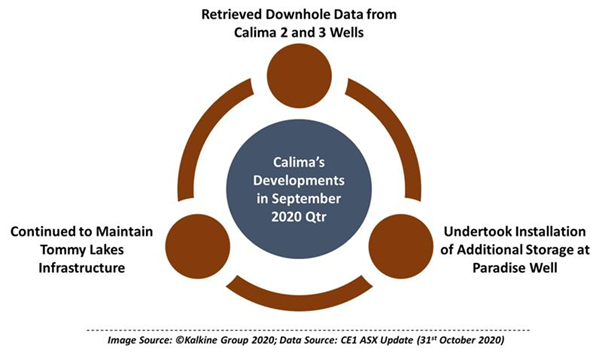 Early in September, Calima revealed its plans to retrieve and analyse the downhole pressure gauges and core from the winter drilling campaign (2019) in Calima wells (2 and 3). The Company successfully retrieved downhole data in September and provided it to leading international energy information services firm Canadian Discovery, together with the core.

The latest findings also indicate that potential Upper Montney wells can be devised with reduced cost and less intense completions, resulting in improved economics for each well.

Calima notified that Sproule and Associates and their local field operations staff continued to maintain the Tommy Lake infrastructure during the quarter. The Company completed the acquisition of Tommy Lakes facilities in April 2020 materially under budget, at the cost of A$750k.

Throughout the summer, work was finalised to ensure the preservation of assets and winterisation of camp facilities. Besides, power generation units installed at Tommy delivered through the solar components consistently throughout the summer, using very less external fuel to produce electricity.

The Company mentioned that these power generation units are essential for retaining cathodic protection on facilities and the pipeline to avert corrosion by inducing an electrical current. These units also counterbalance the use of diesel generators that use over 50,000 litres of fuel each year.

Calima carried out the installation of additional oil storage of 800bbl at the Paradise Well (100% WI) in September ahead of winter. The well is situated 250 km to the southeast of Calima’s extensive Montney interests in the northeast (NE) British Columbia (BC) and 40km to the NE of Fort St John.

The total production days in the September quarter were 81 days, leading to total 1929bbl (averaging ~23.8bbl per producing day). The additional oil storage undertaken at the well in September is expected to ensure a higher number of days on production, considering the well will not be closed in poor weather.

During the quarter, positive momentum was also noted in the gas pricing, with natural gas futures going above USD 3 in US/Canada for the first time in the last two years. The gas prices surged on the back of projections for chilly weather and speculation that gas supplies will be tight in winter amidst a recovery in demand.

All in all, Calima continued to advance the development of its core assets in Q3 2020, in line with its counter-cyclical business strategy designed to reap the benefits of momentum returning to the O&G sector. The improving gas market situation and the recent win of left-wing New Democratic Party (NDP) as a majority government in BC seem to be fostering Calima’s growth prospects in the months ahead.