88 Energy Limited (ASX:88E) has reported yet another success in relation to its Project Icewine located on the North Slope of Alaska. Previously, the Company had reported an increase in the working interest at Project Icewine, where Area A leases were officially re-allocated to 88E.

Detailed discussion at: Another Big Win for 88 Energy, Working Interest Increased at Project Icewine Ahead of Independent Resource Estimate

Off late, ERCE Equipoise Pte Ltd (ERCE) has prepared estimates for Independent Prospective Resources for prospects in the proximity of the recently drilled Charlie-1 Well at 88E’s Project Icewine.

Interestingly, a large part of the resource has been estimated within the Seabee formation. This Seabee formation has been interpreted to be a constituent of a large stratigraphic accumulation over several, possibly associated, sand bodies in the Lima Fan System.

The encouraging projections are shown in the table below: 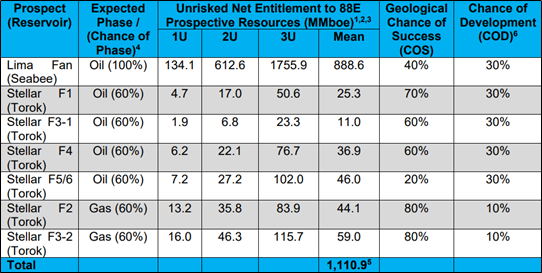 Further, 88E discovered outstanding oil saturations in cores taken from the horizon during the drilling of Charlie-1 and reservoir deliverability is yet to be established as there was no flow test at this horizon in Charlie-1.

From here on, based on the evaluation of the flow potential in the Seabee and substantial size of the estimated resource, 88 Energy seems optimistic to attract a partner to finance the drilling of further wells. Simultaneously, the Company also looks for positive outcome from the potential for light oil in the Torok, which has the potential to enhance value significantly.

Prior to the drilling of Charlie-1, 88E internally estimated the net potential in the Lima Fan System at approximately 100 million barrels. The recent large independent upgrade and the expansion in working interest in the leases have enhanced this potential to almost 900 million barrels net to 88E.

88E believes that this is a great outcome for its shareholders and results like this are compelling for drilling at Project Peregrine, which is another similarly sized opportunity for 88E.

On its way ahead, 88E looks forward to immediately commencing the farm-out process for 2022 drilling at Project Icewine.

Interestingly, 88E had also chosen the preferred bidder for the farm-out process at Project Peregrine and discussions regarding the same have progressed to the final phase. The process remains subject only to finalisation of standard documentation, and the execution of the final documents is expected in the next few weeks.

88E remains on schedule for the spud of the first well at Project Peregrine for a late February 2021 and looks forward to closing the transaction as soon as possible and get going on the drill program.