Gold exploration company Twenty Seven Co. Limited (ASX:TSC) is focused on unlocking the extensive potential of its three premium projects in Western Australia. In a recently released presentation, the Company discussed its projects, along with strategies and plans for the upcoming period. 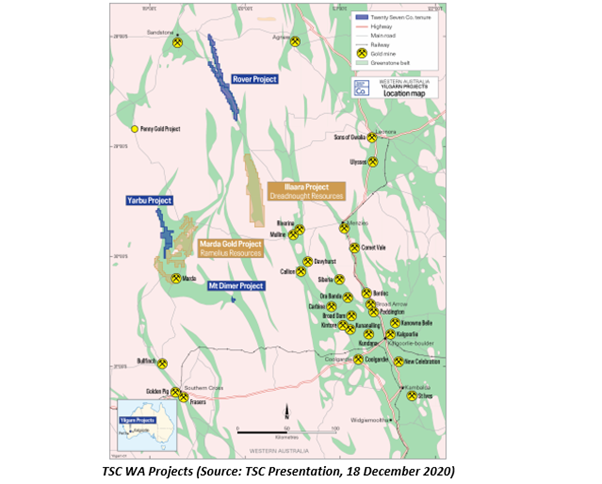 The Company identifies Mt Dimer as the most advanced project with a recorded gold production of 8,500 ounces from the historical mining open pit operations up to a depth of 50 metres. The high-grade gold mineralisation is open at depth and along the strike.

The mining lease was last operated in the 1990s when gold traded at a price of $500 an ounce. The open pit mine produced over 77,000 tonnes of ore with a gold grade of 3.44 g/t while no production or substantial progress has been since 1996. The previous drilling programs indicate the extension of the mineralisation under the open pit.

TSC has completed an aerial drone survey of the mining lease and the open pit. A detailed historical drill hole database and a 3D model have been created. Further, a campaign to assess the historical tailings storage facility (TSF) and the heap leach pads (HLP) has already commenced. 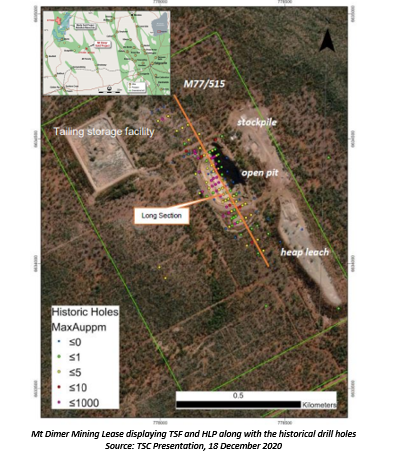 As the Company has secured regulatory approval, a RC drilling program has been planned in Q121 on the mining lease to classify the JORC complaint mineral resource.

TSC to Build Up on the Excellent Historical Results

TSC realises the major potential for gold mineralisation along the strike and under the existing open pit. The region had recorded long intercepts with a gold grade of 3.97 g/t gold. 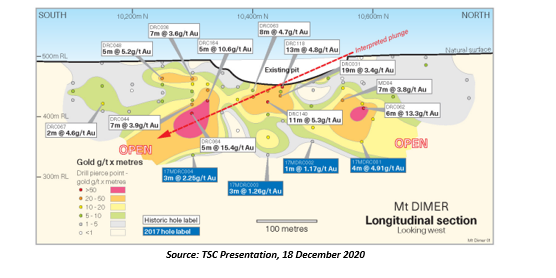 The adjacent exploration tenement hosts prospective mafic rocks with substantial sheared greenstone/granite contact. During the past 15 years, the tenement has been explored for iron ore. The data compilation and reprocessing geophysics is ongoing.

TSC plans a mapping and sampling program for early 2021 along with the Mt Dimer inaugural drilling campaign.

Rover Project is a large tenement holding in central Yilgarn, prospective for Archean gold hosted within the massive sulphide deposits. The project includes the Harmonic and Creasy prospects where substantial gold has been intersected at surface during the past 12 months. TSC will continue to build a strong portfolio of premium targets to test the new Blue Hills and Four Corners gold prospect along the strike from Harmonic.

TSC anticipates the results of the recently concluded soil sampling program to be released shortly. The RC drilling program which was concluded in October 2020 highlighted the strong potential for the Harmonic deposit. The drilling program intersected broad gold intercepts either from the surface or at shallow depth at three RC drill holes.

The Harmonic prospect remains open to the north and south, with the recent results confirming the presence of low-grade gold mineralisation along the strike.

Yarbu in the Neighbourhood of Establishing Mining Operations

The Company has already planned an extensive geochemical program to focus on the substantial Clampton Fault and accessory structures during early 2021. The Clampton Fault is interpreted to be highly prospective for Archean shear hosted gold deposits.

All in All, TSC has multiple projects with scale potential in first class jurisdictions. The Company, focused on gold, is well funded for forward programs.