KRR at its two Tennant East prospects, which include Lone Star Trend and Commitment, has drilled a total of 11 reverse circulation (RC) holes for 2,376m. The newly discovered ironstones were intersected at Commitment.

Assay results returned from the ironstones are geochemically anomalous. The results indicate that they are prospective to host IOCG (iron oxide copper-gold) gold mineralisation.

The area lies under the Georgina Basin’s Cambrian cover, which concealed the anomaly in the previous exploration. The cover was found to be only 30 to 70m deep, and the two holes intersected ironstone in Warramunga Formation basement rocks.

The main airborne magnetic anomaly has a strike length of more than 1km. The Company has commenced a detailed ground magnetic survey to aid in delineating the magnetite rich zones and any relevant structures for more targeted drilling.

Strongly hematite altered shales were intersected from the drilling. The best results were returned from the main gravity anomaly.

The Company plans to extend the gravity survey to the edge of the tenement in the west, to within 700m of Emmerson Resources Mauretania deposit.

In the Tennant Creek Region, the Company holds 7,900km2 in 16 tenements. The four main project areas covered include: 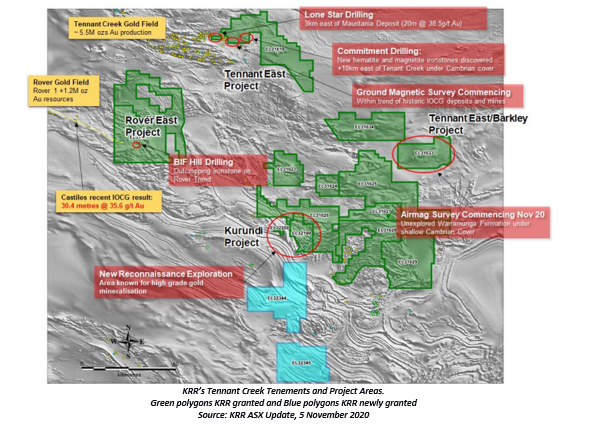 The holdings of Treasure Creek, which is a wholly owned subsidiary of KRR, cover areas along strike of both the Rover Gold Fields and Tennant Creek, and has areas of similar structural and stratigraphic settings.

The Company believes in a significant gold discovery potential with the application of new/advanced geophysical techniques and systematic exploration.

IOCG style mineralisation is targeted in the exploration and would be characterised by mineralisation of gold and copper associated with ironstone bodies, possibly of the Tennant Creek Style.

KRR has been awarded a funding grant under NTGS’ (Northern Territory Geological Survey) administered Round 13 of the Geophysics and Drilling collaborations program.

The program would test as well as define significant magnetic anomalies and cover depth in an unexplored area under the Georgina Basin. The surveys are scheduled to commence in two weeks.

The Rover East project’s geophysical review is ongoing, and the Company has identified multiple geophysical targets.

Ground geophysics is planned especially along the Rover trend’s eastern extension. It will be followed by drilling of the best targets.

At Kurundi Project, KRR has four exploration licences over part of the Kurundi Anticline and covers multiple prospects including the Kurundi historic gold mine (historic underground and open-pit mining) and the Whistle Duck prospect.

Initial reconnaissance exploration has also been completed at the Kurundi Project. The area is known for high-grade copper and gold mineralisation. Assay results are pending.