The potential of the process route has been further validated by the Company’s new HPA testwork, which is being completed alongside the completion of the Speewah testwork and studies.

Notably, TSW Analytical completed seven tests on alternative aluminium feedstock sourced by KRR. The testwork has confirmed that a high purity HPA precursor can be produced with fewer process steps than required on the Speewah feedstock.

This implies that KRR can focus its start-up HPA development around a Perth industrial estate initially. It would not immediately need large capital and permitting of building an acid plant in Kimberley, adjacent to a mining and processing operation.

Notably, the HPA precursor is of very high purity, with most elements below 1ppm and may be suitable for producing 4N (99.99% Al2O3) HPA following calcination and washing. 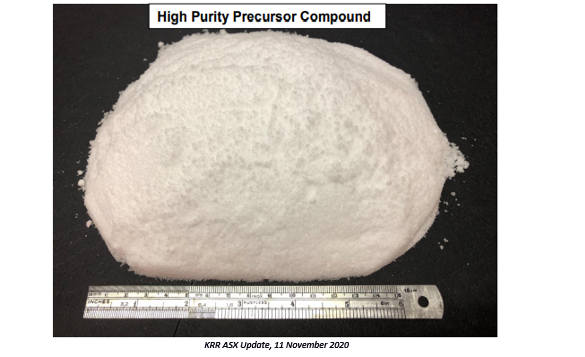 Calcination of the HPA precursor and the Speewah precursor at 1250°C is underway. It is a crucial final process step and would focus on ensuring that no contamination is introduced during the heating and assaying process, thereby leading to the production of the 4N HPA product.

King River Resources’ plans are centred around initially scaling the SSM project for the production of HPA. At the same time, Vanadium (V2O5), Titanium (TiO2) and Iron (Fe oxide) will be targeted as potential co-products but would not be included as part of the Pre-Feasibility Study (PFS). It would substantially decrease the project size, with the potential to reduce capex and maximise returns.

King River Resources is progressing well with the Speewah PFS. Recently, the Company reported on metallurgical testwork results and progress in compiling the PFS. Significant PFS developments have been the focus of testwork and studies. The metallurgical testwork of the Company, which uses a simplified purification process has been successful in producing a high purity precursor compound with very low levels of contaminants.

A phase test which used XRD analysis has demonstrated that the alumina is converted to the stable alpha crystal finding suitability for LED and battery separator applications.

The mining study has been updated by CSA Global on the simplified flowsheet with improved overall recovery and lower throughput.

Meanwhile, further developments are ongoing that would effectuate the advancement of the HPA production focus on the Speewah Project.

Following the significant announcement, KRR stock zoomed by 11.5% midday, closing the day’s trade at $0.027 on 11 November 2020. The stock with a market capitalisation of $40.39 million has exhibited a price momentum of 1.23x on the year-to-date basis.