Corazon had concluded an aerial MobileMT geophysical survey at the Lynn Lake identifying numerous anomalies which indicated Ni-Cu-Co mineralisation. The significant and highest priority geophysical anomaly was defined by the MobileMT survey. The anomaly was located on the vacant tenures outside the project area. 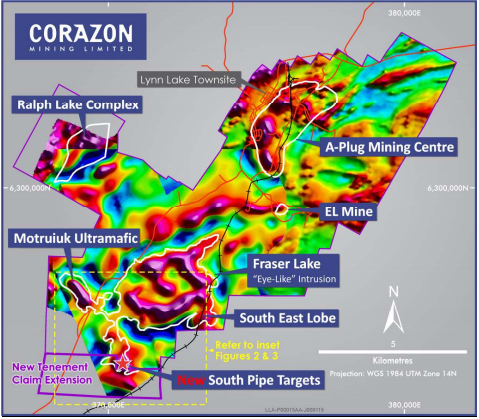 The new anomaly comprises of two large magnetic pipes like bodies, of which one is conductive with the potential of a deep intrusive pathway which is understood to be associated with the known nickel copper-cobalt sulphide mineralisation of the Fraser Lake Complex (FLC).

To test the identified priority targets at Lynn Lake, Corazon intends to arrange a northern winter drilling. Corazon plans to commence the drilling as soon as practicable contingent on the Covid-19 restrictions in Canada.

The initial drilling program will prepare the access tracks and drill sites. The work will be conducted as soon as possible prior to the drilling, which is set to commence early in the new year.

South pipe Target - The South Pipe magnetic anomaly includes 2 parallel pipe-like bodies almost one fifty metres apart and is a major geophysical feature in the region west of the FLC. The southern body is conductive, almost 100 metres beneath the surface. The northern pipe body is not conductive but is a strong magnetic body with a geophysical signature similar to Motruiuk Ultramafic Complex (peridotite) in the north.

These features are first of its shape (pipe like) at the FLC and has been identified as an exploration target similar to the historically mined El deposit with recorded historical production of 1.9Mt with 2.4% Ni and 1.15% Cu.

The new conductors identified from the MobileMT geophysical survey have been prioritised on the basis of their intensity and coincidental anomalism with other characteristics. Further, a detailed definition of the proposed drilling and priority targets is progressing.

The greater Fraser Lake Complex (FLC) includes several intrusive mafic/ultramafic bodies at the main FLC body, Motruiuk Ultramafic Complex, the Southeast Lobe, the South Pipe and the regions which join these prospects. The intrusive complex is now understood to be twice the size at the historical Lynn Lake Mining Centre.

Must Read: Corazon Announces the Completion of Drilling Program at Lynn Lake