The company is engaged in copper-cobalt-silver exploration at the Elizabeth Creek Project in South Australia. Australia is the seventh-largest producer of copper in the world. Resources and Energy Quarterly in September edition has forecast copper earnings to reach A$11 billion in 2021-22. The report further mentioned that copper production is set to grow by 1.9% and export may grow by 2.1% in Australia in 2021-22.

The project lies at the heart of the Olympic Copper Province with some of the region’s most famous deposits such as Olympic Dam, Oak Dam West and Carrapateena immediately surrounding the project area.

Elizabeth Creek covers an area of 739 square kilometres in the Eastern Gawler copper province. The company reported a JORC-compliant indicated resource of 159,000 tonnes of copper and 9,500 tonnes of cobalt in two deposits- Windabout and MG14.

The company has 17 diamond drill holes over 3km of strike with an approximate average depth to mineralisation of 400m. The mineralisation at the prospect is flat-lying in narrow stratiform lodes that will allow easy extraction and narrow pillars.

The exploration drilling has covered only 30% of the anomaly area so far. A seismic survey carried out this year confirmed the findings of MT, and new drilling targets have been identified. The firm commenced the drilling programme in October 2020. 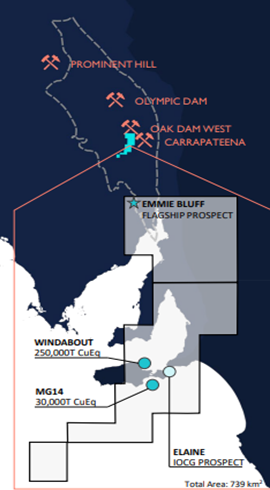 Coda Minerals has identified three high priority iron oxide copper gold (IOCG) targets in the Elizabeth Creek Project using gravity, magnetic and MT survey data. Additional geophysical survey data may be required to de-risk the drilling operation. The company is planning to move ahead with an advance geophysical survey in 2021-22.

The high priority targets delineated by the geophysical data are:

Coda Resource Base and Expansion

The company has the potential to expand on its existing Zambian-style shale hosted Cu-Co-Ag mineral resources through expansion drilling and exploration of potential satellite deposits around the Mt Gunson mining region.