Almost half of the RC drill holes targeted the priority targets within the Harmonic gold prospect, intersecting broad gold intersections at the surface. The latest results suggest that the mineralisation remains open along strike and down dip at the Harmonic deposit.

The RC drilling program targeted to follow up on the historically significant results at the Harmonic and Creasy 1 prospects and test newly discovered gold prospects during the auger drilling and soil geochemical programs concluded in 2020.

The assay results for all 33 RC drill holes have been received with the best results from the Harmonic prospect. The Harmonic gold prospect is located almost 300 metres north of the renowned Creasy 1 gold prospect and was discovered in 2019.

Harmonic gold prospect – 13 RC drill holes over 1,139 metres were drilled registering wide intercepts of gold mineralisation commencing either from the surface or at very shallow depths from 3 drill holes including – 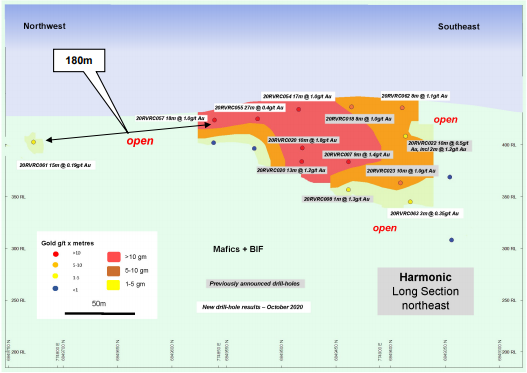 The updated long section of the Harmonic mineralisation suggests gold mineralisation commencing from the surface in the north-west and plunging shallowly to the southeast. The best intercept in the southern section is 3 metres with 0.27g/t gold.

Red Bush: In the recent drilling program, 249 metres of drilling was completed at Red Bush. The drill hole (20RVRC067) intersected strong sulphides with anomalous gold mineralisation including 3 metre with 0.1g/t Au from 53 metres. In addition, lead (to 0.19%), zinc (to 0.11%) and silver (to 18.2g/t) were also recorded. Further follow-up investigation is required to gain more clarity on the strong gold anomaly at Red Bush.

Maynard Intrusion target: 13 holes were drilled over 257 metres on a single line across the broad gold anomaly on the Maynard Intrusion target. The RC drill hole intersected weathered granite confirming the presence of intrusive granitic systems. Despite no substantial gold anomalies intersection and strong bismuth anomalies, a gold pathfinder metal at Harmonic and Creasy 1 was observed. The recent holes tested only a small section of the deposit, and future drilling program would utilise aircore drilling methods over a larger area.

Twenty Seven Co. has already planned further exploration steps at the Rover and Mt Dimer projects for accelerated exploration and development at the mineral projects.