Currently, around 200 million tonnes of fertiliser products are traded around the globe per year. Australia’s imports make for less than 2% and exports represent less than 0.5% of the total world trade. 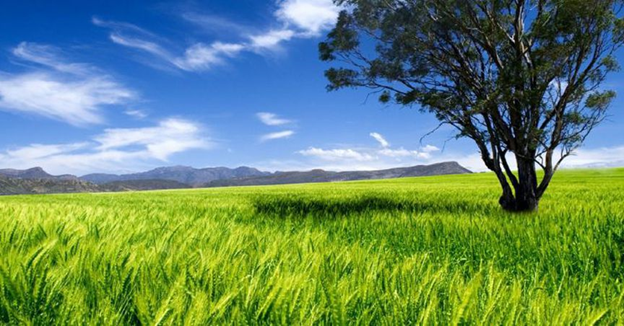 However, as the prices for agricultural commodities shoot up, demand for fertiliser also rises as a direct impact and agricultural producers reap benefits by ramping up their production.

Potential global fertiliser supply is largely constrained with barriers such as the cost of raw materials, high capital requirements for new manufacturing plants, environmental concerns etc. All these factors combined means that if demand sees a surge that is faster than anticipated, the response in supply can lag due to these constraints, leading to price spikes. One company that is a eyeing to reap the benefits of higher fertiliser prices is Fertoz Limited (ASX:FTZ). Since 1 June 2021, the shares of FTZ have gone up by whooping 5x.

Stock Zooms in the past few weeks

The FTZ share price has delivered an exceptional rally in the last few weeks. Till 15 June 2021, the stock had been trading within a range without much of a movement.

However, after mid-June 2021., the stock skyrocketed to a new 52-week high, outpacing the broader market index, the ASX 200, by a huge margin. 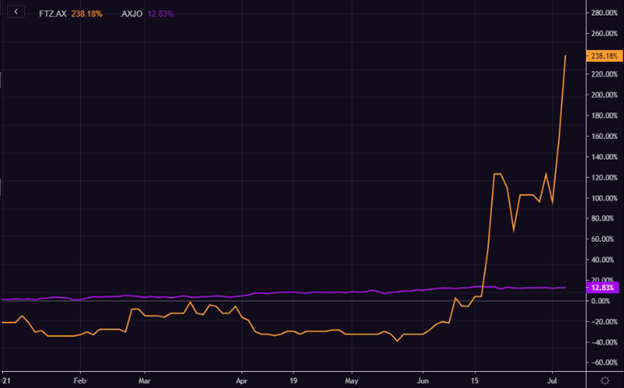 Fertoz is an ASX-listed fertiliser manufacturer, focused on providing organic and regenerative farming operations having reliable and direct access to environment friendly rock phosphate fertilisers. The company was quick to recognise that the burgeoning demand for organic crop farming required more focus on making available an all-natural solution to make soil more fertile and boost its nutrition. Unlike most other players, Fertoz focuses on research and development and then testing to document results.

Phosphate is one of the major nutrients that helps promote overall health of a plant cell, and tissue growth for a higher yielding crop. The company offers organic fertilisation solution that is high in phosphorus, and free of contaminants making it environment-friendly.

Substantial evidence also depicts that replacing conventional fertilisers such as MAP or DAP with rock phosphate builds soil health and reduces its carbon footprints. At the same time, it also aids the crop towards a higher yield.

Fertoz also owns 100% stake in Fernie and Wapiti projects in British Columbia, Canada. These projects can utilise nearby rail and road infrastructure, providing them uninterrupted access to not only the US but also to Northern, Northwestern and Central Canada. Till now, the company has extracted over 1,200 tons and 1,500 tons from Wapiti and Fernie, respectively. The company is currently working on Mine Permits and Bulk Sample Applications at both Fernie and Wapiti projects with an aim to extract around 82K tonnes in the near future.

The management recognises carbon market to be a major opportunity for Fertoz, expanding the company’s ESG credentials. It has started promoting its additional services in the carbon space. Recently, the company forayed into the carbon space with a separate division within the umbrella of Fertoz to extensively focus on carbon sequestration, consulting, activities, and implementation of carbon strategies using Fertoz organic fertilisers. Currently, the company is in discussions with numerous Canadian and US private land owners with respect to reforestation and native replanting works to generate CO2 credits.

The company has withstood bad weather conditions, churning out the highest deliveries of any winter season from January to March of 2021. Although, the worst of the winter didn’t harm the company’s operations much but tough winter conditions with heavy snow falls and freezing rain materialised in some double handling of orders. Another partner, P&H, is almost on the verge of finalising its Standard Operating Procedures for its new 100% organic warehouse after which high volume orders are expected to kick in.

Heavy rains have leached various nutrients from Australia’s east coast soils. Fortunately, the use of FertAg has been proven effective in preventing this situation. Recent application of FertAg on the avocado farms of North Queensland has spurred a lot of enthusiasm amongst avocado growers. The company is now experimenting the use of FertAg with row crops such as organic hops and fruits such as limes and mangoes.

Revenue coming back on track

A few recent highlights of the company’s operations are:

Fertoz Limited (ASX:FTZ) is trading at AU$0.250, with a market cap of AU$46 million. This puts the company in the penny stock category. Typically, penny stocks are volatile and seasoned market participants usually thread this space very cautiously. Additionally, FTZ is from the chemical space and investors across the world are scrutinising the ESG aspects of such businesses very closely. Prudent investing always calls for a clear understanding of the business and sector risks.