Guyana, which was a colony of Netherlands, came under the control of the British until the independence in 1966. Guyana offers a stable mining regime with strong and attractive mining regulation. The South American country offers a stable mining fiscal regime with almost 35% corporate tax, 5% gross royalty, VAT and duty waivers and no requirement of government interest, allowing the privately held miners to benefit from the mining operations.

It is this stable and attractive investment environment that makes Guyana a favourite destination for the foreign and domestic minerals players to invest. The mineral rich country of Guyana holds strong investment treaties including UK, Germany, Switzerland, China, Canada. The mining jurisdiction has experienced minerals player of the likes of BHP, Newmont, Iamgold. Not just mining players, the goldfields of Guyana have also attracted investments from international organisation such as IFC.

In 2013, Troy Resources acquired the Azimuth Resources enabling the gold developer access to 2 prolific mineral project grounds in Guyana. The Australian gold miner, with a background of developing 5 mining operations within 12 years, has focussed on the Karouni gold operations ever since.

The Karouni gold operations include an open pit gold mining and an integrated full-fledged processing plant with extensive exploration avenues within the project area. Presently, the mining operations are primarily sourced from the Hicks 4 deposit and the firm aims to expedite the exploration at the Smarts Underground, Goldstar and Gem Creek prospects. 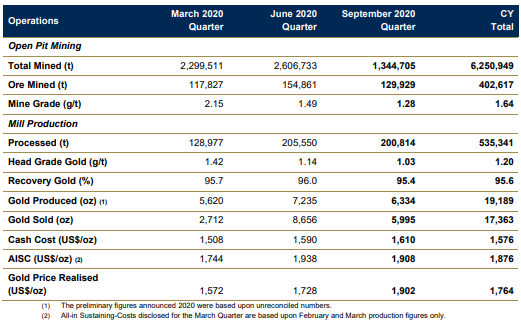 As per the recent update, the mineral resources stood at 16 million tonnes containing 1,007 kilo-ounces of gold with reserves of 77 kilo-ounces of gold. During the September quarter, Troy Resources produced over 6,334 ounces of gold, a lower output primarily due to coronavirus spread and lower ore head grade.

Troy Resources plans to raise A$15 million via placement for which it has received investor commitments for 125 million new shares. The placement is expected to drive the growth opportunities at Karouni gold operations.

In FY2021, the gold player anticipates a gold production of 35,000 – 40,000 ounces of gold at an AISC of US$1,450-1,550 an ounce of gold. Troy is excited with the way the Smarts Underground opportunity at Karouni is shaping up and the ongoing gold price rally.