The strategic efforts of Musgrave Minerals Limited (ASX: MGV) have once again yielded exciting results, taking its exploration at Cue Gold Project to new heights. Perth-based gold and base metals explorer has announced the conclusion of the initial metallurgical test work on the Starlight gold lode at Break of Day with exceptional results.

ALS Metallurgical Laboratorie undertook the test work which was managed and reviewed by Ivan Hunter at Minelogix.

The test work has highlighted excellent total gold recovery on composite samples with gravity and cyanide leach recoveries averaging around 98-99%. Meanwhile, amenability to conventional gravity as well as leaching techniques using standard reagents has also been indicated by the test work results.

The four composites which were collected from 16 representative drill holes across strike and vertical section included two primary or fresh composites (SFMC01 and SFMC02), one oxide (SOMC01) and one transition (STMC01)

All individual samples with ≥1m footwall and hanging wall material were diluted, having overall dilution of typically 25%.

Amenability of the varying types of Starlight regolith gold mineralisation to gravity and cyanide recovery was tested. It was done using small scale tests undertaken on all four composites. Significantly, a laboratory size 3-inch Knelson centrifugal concentrator was used on 3kg batches at a feed size of 80% passing 212µm.

Gravity circuit was included in the processing to reduce the spikes in feed grade, while also slowing coarse gold leaching which enters the downstream carbon-in-leach circuit.

All the mineralised samples from Starlight are classified as free milling. They have extraction typically ≥99% at a grind size of 80% passing 75µm.

Cyanide leach kinetics are fast with most of the gold leached for all the sample domains within the first eight hours. As anticipated, the rate and extent of extraction were slightly slow at coarser grinds. In the primary samples, very low residues of <0.1 g/t Au was witnessed. 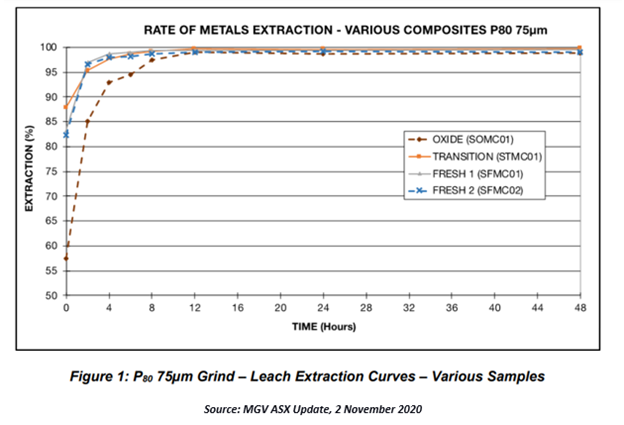 Cyanide consumption from the tests are regarded moderate for a typical Yilgarn gold ore and was concluded at an established grind size of around 80% passing 75µm.

In all samples, cyanide solubilisation of copper was generally <15% leached, resulting in low copper solution values of less than 15ppm. Meanwhile, lime consumptions were typical of the lithologies treated in Perth tap water which was used as a standard base case.

More than half of the ongoing Phase 2 aircore drilling program of a planned 21,900m is completed at the quarter-end. The program is targeted to high-priority gold targets testing on Lake Austin.