A Walk-Through Krakatoa Resources’ Progress at Turon Project, KTA to Undertake Drilling Program at the Earliest

KTA shares a strong commitment towards substantially boosting the wealth of its shareholders by way of dilution minimisation during the acquisition and development of high-value metal projects.

KTA holds 100% of the Belgravia Porphyry Project as well as the Turon Project (EL8942), which was granted in February 2020 subsequent to the direct licence application (ELA5882) in late November 2019.

The description of the project’s location is as follows:

Fast-forwarding to June 2020, KTA reported additional Deep Ground Penetrating Radar (DGPR) results for its survey of the historical Britannia Mine that lies within the 100% owned Turon Project. The mine forms the southern extent of the historical Box Ridge line of gold workings which strike over a length of 2.4km.

The DGPR survey was believed to offer KTA a focus and advance the Britannia target to drill-ready status. Moreover, the outcome, particularly following the identification of a remnant pod of high-grade mineralisation that was expected to be amenable to further testing and early exploitation was a shot in the arm for KTA.

Two critical anomalies, which were believed to coincide with structurally controlled quartz veining were identified through the DGPR interpretation across Britannia. The relative depth of these critical anomalies differentiates them with a shallower anomaly that directly corresponds with the historic Britannia workings. 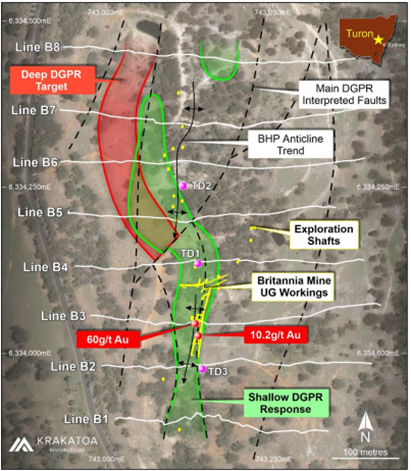 Numerous other near-vertical or steeply dipping structures were identified through the survey that comprises of corresponding substantially broad anomalous zones related to alteration of the host beds in the country-rock.

The survey response was highly encouraging for KTA, and the Company expected beyond a technical success. Moving forward, the Company has planned to implement drill program as soon as possible.

The historical RAB drilling north of the Quartz Ridge Gold Mine, also situated within the Turon Project, discovered numerous highly anomalous gold intercepts with results up to 10m @ 1.64g/t gold from the surface to end of the hole. 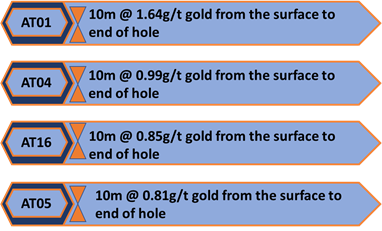 Sampling of all holes throughout their developed length as a single composite sample of 10m was completed, and the anomalous results were not followed up. It had been around 30 years since the drilling program was completed across the northern extension of the Quartz Ridge Mine.

KTA believes that Quartz Ridge exhibits an exciting shallow exploitable opportunity for them where multiple walk-up drill targets with significant gold tenor have been discovered.

Funds Raised for Diamond Drill Program at The Turon Project

Towards the end of June 2020, KTA lodged an application with the NSW Resources Regulator to conduct a diamond drill program at the Turon Project that sought approval for up to 1,770m of diamond drilling at several exciting shallow gold targets situated within the Box Ridge and Quartz Ridge line of workings at Turon.

In order to advance the Company’s three projects in Lachlan Fold Belt, KTA announced a capital raising and received firm commitments from professional and sophisticated investors to raise $2,400,000 through the placement of 30,000,000 ordinary shares.

The advancement work includes the following