The coronavirus pandemic has created havoc across the world, impacting every country, industry and business. The automotive industry has also been hit hard as a consequence of nation-wide lockdowns and restricted movements. Loss of jobs and salary cuts reduced the disposable income, which further put a pressure on demand-driven factors for automotive vehicles.

On the supply side, it impacted all the stakeholders from parts manufacturers to distributors who faced considerable medium-to-long term impact. The major hindrances faced were shortage of raw materials, liquidity crunch which hampered working capital of the companies, deferred launches and not to forget the enormous burden of fixed cost.

Although the policymakers across the world are playing their part in supporting the impacted industries primarily by infusing more liquidity to aid the continuation of the business operations Besides, tax incentive schemes have been under the radar to boost the demand side.

Let's have a look at some prominent automotive players who have gone through the initial shock and are coming out of it remarkably, owing to their qualified management, strategic initiatives and vast experience.

Eagers Automotive Limited (ASX: APE) is an Australian automotive player having a long history or more than a century. The company services more than a million units per year in dealership locations across Australia and New Zealand

In the recent 1H20 numbers, the company reported statutory profit after tax at $11.8 million, down from $42.2 million reported in 1H19. However, the revenue increased significantly from $1845.7 million to $4155 million during the same period.

In the recent trading update for the nine months ended 30 September 2020, the company stated that some demand was picking up from the March lows which was experienced doing nation-wide lockdown. But the supply constraints caused by the global manufacturer factory closures during the June quarter has led to lower vehicle deliveries.

The stock has also participated in the global recovery and risen quite well from the low of $2.5 in March to $10.860 as on 30 October. This is a multifold gain of more than 340% in a few months.

The COVID-19 response was also visible on the company’s cash outflow. The Non-Executive Directors’ fees was forfeited for April to June 2020. The rent abatements of $1.4 million (Including $808k related party support) in H2FY20 and $1.7 million for H1FY21 also took place. 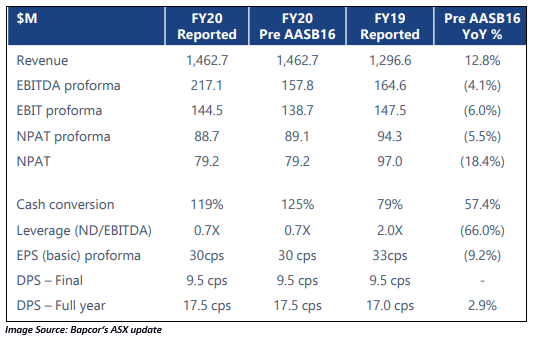 In the 1st quarter update for FY21, the company again took a hit on the sales due to government-imposed restrictions in Victoria and Auckland amid the rise in the Coronavirus cases. However, despite this, the business did pretty well, and the group's revenue was notched up by 27%.

These numbers were assisted by government stimulus and reduction in the use of public and shared transport amongst customers. The company expects to deliver strong first half but unclear about the second half and therefore refrained from giving guidance for the current financial year.

Super Retail Group (ASX: SUL) is one of the top 10 retailers in the listed space, which owns and operates a broad portfolio of brands like Supercheap Auto, Macpac, Rebel Sport.

In FY20, the entire group posted a $2.83 billion of sales figures, up by 4.2% from pcp, owing to the company’s Omni-retail strategy which led to quick adaption to changes after the COVID-19 pandemic. 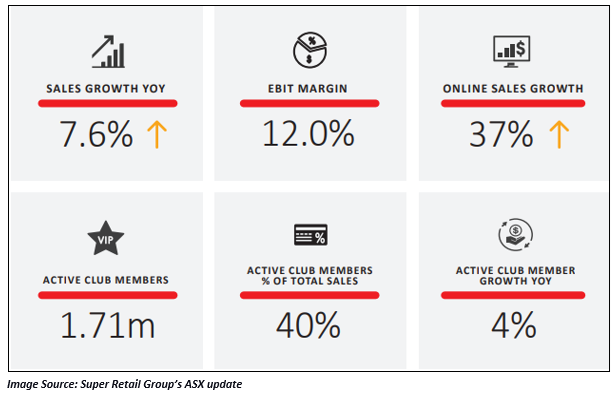