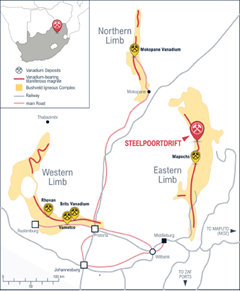 Why VR8 bodes well with its investors? 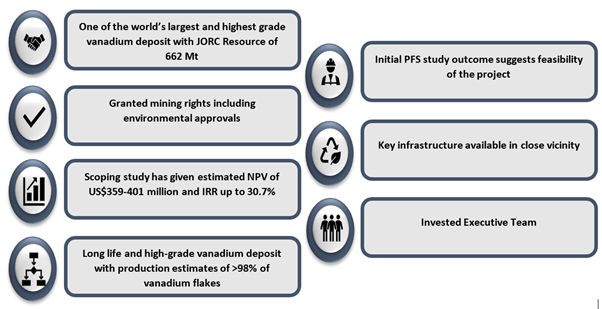 The Bushveld Complex houses several major projects, including Vametco Vanadium Mine, Rhovan Vanadium Mine, Two Rivers PGE Mine, among many others. The project lies in close proximity to existing processing plants with an adequate supply of power and water. The project location is well connected with the port through roads and rail network.

VR8 has already secured mining rights along with environmental approvals for the project. During the March quarter, the Company formed a team of highly experienced personals to commence the Pre-Feasibility Study (PFS) on the project.

Steel and alloys and Battery industries to push demand for vanadium

Almost 90% of the vanadium demand comes from the steel and alloys industry. Vanadium is used to strengthen steel without doing much alteration in its weight. Lightweight alloys are in huge demand in the aviation manufacturing sector. With the growth in the Chinese construction sector, and stringent regulations regarding weight and strength of the steel used, the demand for vanadium is picking up at a higher rate.

Also read: Why the stocks of Vanadium Resources (ASX:VR8) are flying high?

Another emerging sector where vanadium plays a crucial role is the battery industry. The market forecasts suggest that there will be addition of 1,200 GW of battery capacity by 2050. VR8 could add up to 10,000 tonnes of vanadium to the undersupplied market.

Nearly 85% of all vanadium currently comes from Russia, China, and South Africa. Since Chinese sources are highly polluting and new environmental regulation limits their production, South African mines will be in an advantageous position to supply vanadium to the Chinese market.

Preliminary results of PFS showcased reduction in overall stripping ratio and in operation if the medium-grades are used in the production cycle.

In January 2021, VR8 started working on the Pre-Feasibility Study with a team of metallurgists and geologist. The key objective of the study was to work on the design and costing parameters of the project. The study took into account the existing resource base and geological data for the pit-shell optimisation study. The PFS was focused on identifying the most profitable pit shell with a minimum Life of Mine (LOM) of 25 years, with an annual throughput of 1.6 Mt. 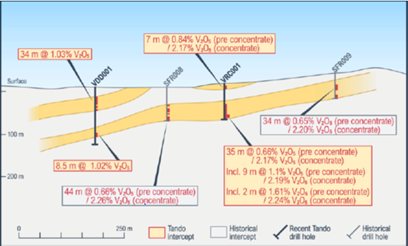 The PFS team has placed the medium-grade ore in the waste stripping category. The results showed that if the medium grades were used in the production cycle, that would reduce the overall stripping ratio, and as a result, lowering the overall cost of operation.

The medium-grade ore will provide a significant opportunity to enhance the LOM of the project and a further increase in production.

The CAPEX requirement and project fundamentals will be derived from the pit shell optimisation study. Going forward, economic evaluations will be included in the PFS.

Near-term plans of the project

The Company is moving towards the completion of the PFS and will move swiftly to the Definitive Feasibility Study, which is currently at the planning phase.

Holding one of the world’s largest vanadium deposits, VR8 is highly undervalued with respect to its peers

With a market capitalisation of ~A$20 million, the Company is highly undervalued with respect to its peers, and the below picture shows the comparative relation when it comes to the resource base. The Company holds one of the world’s largest and highest grade vanadium deposits and currently moving swiftly on the project advancements.

The preliminary results of the PFS have indicated significant internal rate of return (IRR) and net present value (NPV) of the project. The market has huge potential for vanadium, and VR8 will play a key role in the short to long term.