Golden State Mining Limited (ASX:GSM) has released its quarterly activities report for the period ended March 2021. The report highlights the developments at its flagship Yule project in the Mallina Basin of Western Australia, along with drill campaigns planned for the year.

At the end of the quarter, GSM held a cash balance of AU$3.4 million. 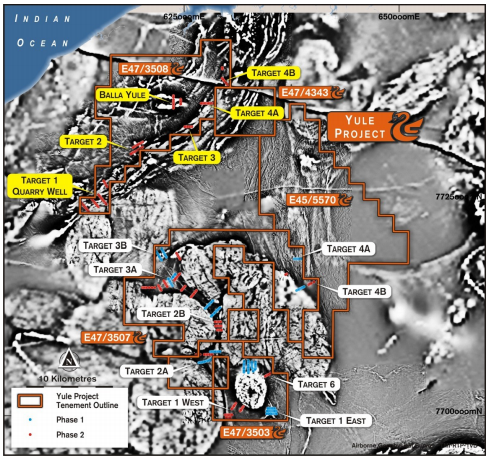 All holes during the phase 2 reconnaissance program were either drilled on nominal 160m centres to blade refusal or to the limit of available drill rods (156m maximum).

The company drilled 21 holes on four variably spaced traverses (at 160m centres) for a total advance of 2,168m.

Further, these intercepts were complemented by numerous intervals with elevated +10ppb gold.

Two additional AC traverses tested magnetic dislocations to a north-south structure and parallel demagnetised zones. Some of the intersected anomalous gold intervals include:

A total of 12 holes were drilled at Target 2A for a total advance of 722m. Further, additional end of hole (EOH) arsenic anomalies recorded are expected to help in 2021 target vectoring.

At Target 2B, 14 holes were drilled on three east-west traverses aggregating to 859m. Although no significant gold intersections were recorded, multiple EOH +50ppm arsenic anomalies were registered, one of which was in hole 20GSYSAC0273 – 1m @ 666 ppm from 40m.

Six additional traverses were drilled at Target 3A in proximity to the existing traverses that were tested during phase 1 of the program.

Another six holes aggregating to 482m were tested on a north-north-west trending traverse at Target 3B, 1.2km east of phase 1 drilling. The most notable intersection included –

On the western traverse, two holes were drilled with the most notable gold intersection of +50ppb interval in hole 20GSYSAC0290.

Five holes, 20GSYSAC0295-299 were drilled for about 488m on a single east north-east trending traverse. Although, no substantial gold intersections were recorded, numerous elevated +10ppb gold intervals were recorded in 20GSYSAC0296.

A total of 29 holes were drilled to test three traverses, spaced a kilometre apart for a total advance of 1,571m. The best gold intersection was a 6m intersection with 63ppb gold w recorded within the cover sequence.

Initially, numerous gold intersections of +10ppb were reported from the target, of which two occurred in fresh rock at the EOH.

Six holes were drilled on one NW traverse for a total advance of 323m. The best gold intersection was recorded at -

A total of 18 holes were drilled on two ~500m spaced traverses for a total advance of 1,681m. No substantial +50ppb gold intersections were recorded at this target.

As many as 15 holes aggregating to 1,281m were drilled on two N-S traverses. Furthermore, an east-west traverse, 2.5km south-east of Balla Yule, was tested. A total of six holes were drilled for a total advance of 451m. No significant gold or base metal intersections were recorded at the targets.

At the target, 20 holes were drilled at three distinct traverses for a total advance of 2,143m. The southernmost east-west traverse at Target 4A included an 18m interval from 6m at hole 20GSYSAC0092.

The wide intersected zones with elevated gold levels at the target include a 4m +50ppb interval within 40m at hole 20GSYSAC0091. Several +10ppb gold intervals were recorded at the hole 20GSYNAC0094 from 139m.

The drilling campaign, planned in May 2021, targets to follow up on anomalous gold intersections such as –

1,500m RC Program at LCT Pegmatite Targets - Four LCM pegmatite targets were generated on the basis of lithium pathfinder analysis from the results of the phase 1 and 2 AC programs. A 1,500m RC drilling program has been planned to test these targets.

The campaign is expected to start in June 2021, subject to statutory approvals. 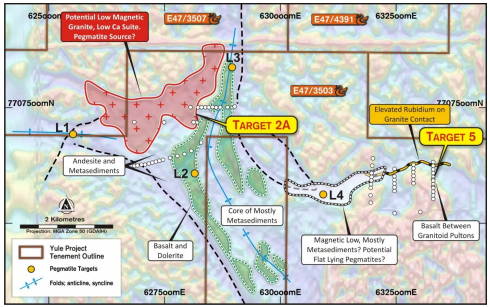 For Detailed Discussion: Gold and Lithium Hunt on the Cards in Golden State Mining’s 6-Month Game Plan at Yule

At this project, GSM is engaged in designing and planning of a geochemical program to assess the remaining targets that were not covered under the first geochemical program. Activities at the wholly owned Four Mile Well project are scheduled to begin in June 2021.

During the quarter, GSM closed a bookbuild to raise AU$3.2 million, via a placement, from professional and sophisticated investors.